The Broncos made it their mission to bolster their roster this offseason in the aftermath of the shellacking they received from the Seahawks in Super Bowl XLVIII.  They improved their defense by adding guys like DeMarcus Ware and provided additional weapons for Peyton Manning such as speedster Emmanuel Sanders. While they definitely improved as a team, ultimately it wasn't enough to overcome Russell Wilson and the Seahawks.

The game that was held in Seattle yesterday afternoon wasn't nearly as close as the final score would have you believe.  The Seahawks dominated for most of the game before Peyton Manning executed a touchdown scoring drive and the game tying two-point conversion.  There was a brief moment of concern for us Seahawks fans, but it was quelled when Seattle won the overtime coin toss and Russell Wilson lead his team on a game winning drive that was capped by a Marshawn Lynch touchdown.

Like the Broncos, the Seahawks made moves to improve their roster this offseason, too.  The difference was in the fact that the Seahawks didn't add marquee names to their roster and instead looked to better themselves through the draft and within the guys they already had. 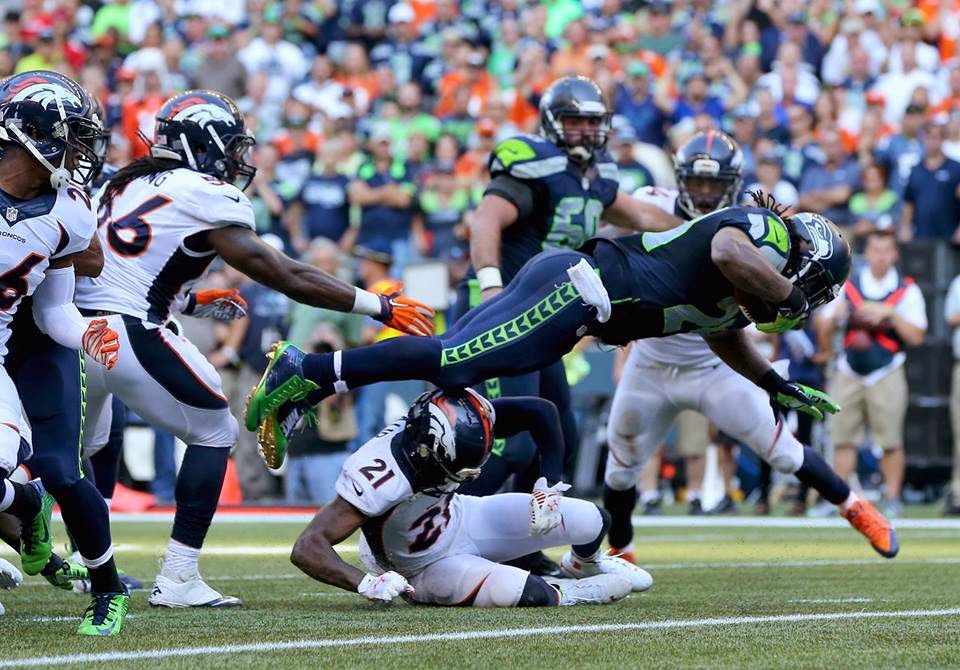 While the Seahawks have certainly looked good through all 3 games this season, they've yet to really impose their will on teams like they had in previous seasons. This leads me to think that we've yet to see our team really hit its stride. With an early bye week coming next week Seattle will be forced to do this down the stretch.

While its still way too early to talk about playoffs, Super Bowls and end of the year awards, I want to say this publicly so you all can keep it on your radar: Marshawn Lynch will be an MVP candidate.  As spectacular as our defense has been, it'll be too difficult to discern a single standout player from that group.  Russell Wilson will continue his brilliance, but at the end of the year, his numbers won't hold up against pass-happy players like Brees, Stafford and Rodgers. Lynch, on the other hand, will continue to be the staple of our offense and he looks like he's more than up for the challenge.

I abhor the fact that Seattle has their bye week so early in the season.  Fortunately, we appear to be in good health through the first quarter of the season.  The Cardinals stand atop the NFC West, but like their previous hot start, you know its going to be unsustainable.  The Rams are preparing themselves for the Marcus Mariota sweepstakes while the 49ers are just one or two losses away from a total catastrophic meltdown.  Despite the early bye, you have to feel really good about how your Seahawks look and where they are right now.