I've been a Seahawks fan all of my life.  I've been privileged to have watched all three Super Bowls Seattle has been a part of.  All three felt uniquely different before, during and afterward. After Super Bowl XL, I felt cheated and angry.  After Super Bowl XLVIII, I felt euphoric and joyous.  After last night, I feel sick to my stomach.

Going into last nights match, having experienced a devastating loss as well as a triumphant victory, I had very measured expectations. I knew we were going up against one of the greatest coaches and quarterbacks of all time.  I knew this wasn't going to be a repeat of last year's thrashing, but I also believed we were far and away a more complete and better team. I expected to win, but I knew it wasn't going to be easy.

That was more or less my feeling all season long.  I never wanted last season's euphoria to end.  Unlike last year where I savored every victory and milestone along the way, knowing that this was a special team on track for a special season, I instead watched every game this season somewhat nervously just wanting it to be over so we could add to the trophy shelf.

After Tom Brady connected with Julian Edelman for the go ahead touchdown with 2:02 remaining in the game, it truly felt like the prophecy was ready to be fulfilled. We had all three of our time outs, plus the two minute warning.  We were giving the ball to our star quarterback who has pulled out these kinds of miracles all throughout his short career. We had the ball and fate in our hands.  A two minute drill was all we needed to become the first back to back champions in over a decade.

The kickoff sailed through the back of the endzone. No time was taken off the clock and we had 80 yards between us and history. The very first play of the drive, Russell Wilson connects with Marshawn Lynch on a 31 yard wheel route that gives us the ball near midfield.  The two minute warning stops the clock for us at 1:55.  We still have all three time outs.

The next play, Wilson fails to connect on a deep ball to Jermaine Kearse.  The subsequent play, Max Unger fails to get the snap off in time and forces Seattle to burn it's first time out. No worries-- we're still on a short field with two timeouts.

Wilson tries again on a deep ball to Chris Mathews, who was having his finest performance, but fails to connect.  However, on 3rd and 10, Wilson comes up huge with an 11 yard strike to Ricardo Lockette. 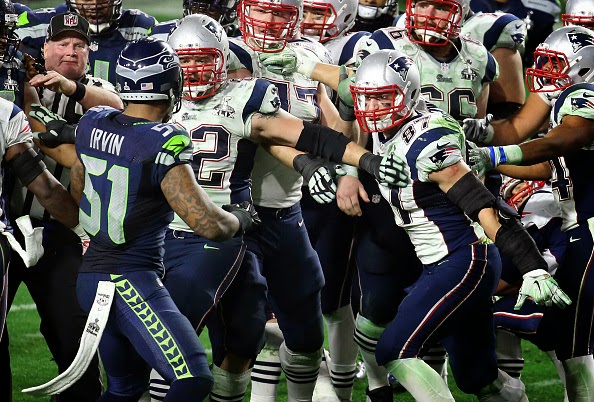 The Seahawks appear to be in no apparent hurry despite their circumstances.  They get back up to the line with about a minute and 14 seconds left and Wilson heaves it downfield to Kearse.  Everyone thought the pass was broken up, but Kearse never took his eyes off it and managed to maintain possession.  An improbable play places Seattle five yards away from victory.  They kill the clock with their second time out at 1:06 and it looks like we have this one in the bag.

First and Goal from the 5.  Seattle feeds the ball to Lynch who picks up 4, stopping just shy of pay dirt. Seattle lets the clock trickle down.  After all, they've still got about 50 seconds left, a timeout and a mere 36 inches to move the football.

As Seattle returned to the line to run the next play on 2nd down, my mind was flooded with thoughts.

I envisioned Seattle running a counter play to the left, giving it to Beastmode as he powers his way into the endzone.  I pictured New England getting the ball back with about 30 seconds left.  Brady checks one down and calls a time out.  He gets sacked and they burn their final time out.  He then heaves the ball skyward on a last second hailmary, only to get picked off by Richard Sherman.  The blue, white and green confetti rains down on the University of Phoenix field as the Lombardi trophy returns to the Pacific Northwest. I pictured Wilson, Lynch and Wagner signing long term deals.  This team becomes a sure-fire dynasty for years to come.

My dream sequence was snapped in unison with the ball and suddenly I found myself staring at the screen. It felt like I was looking down at my body on an operating room table.  Did we just throw the ball?  Have I died?  What just happened? We didn't just throw the ball there, did we?  Did I die?

Did we seriously just NOT give the ball to Marshawn Lynch?

The party I was at erupted in raucous confusion. Someone yelled "It was incomplete!" There were shouts of "What were they thinking?" But I just sat there, dumbfounded, thinking "How do you not give that ball to Marshawn?"

Just like that, we knew the season was over.  Russell Wilson's pass intended for Ricardo Lockette was intercepted by a rookie cornerback named Malcolm Butler. The Patriots would get the ball back at the one yardline.  They had no room to kneel on it, we had a time out left and it was still not outside the realm of possibility for us to at least get a safety, or perhaps even a game-winning fumble recovery for a touchdown.

A miracle could still happen, but this was Tom Brady and Bill Belichick-- Our miracle quota expired after Kearse's amazingly improbable catch.

Sure enough, Seattle jumped offside and a scrum ensued.  New England got the ball at the 20 with 18 seconds left.  We were out of timeouts.  Tom Brady took a knee, won his 3rd MVP and his 4th Super Bowl. We had it.  We gave it to them. 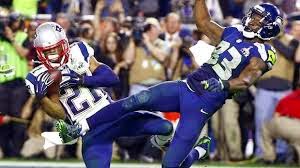 It's hard as hell to get to a Super Bowl.  Despite what many of us may have thought after last year-- it's really hard to win them, too.  It's okay to feel how you're feeling right now.  Whether it's sadness, anger, frustration, confusion, fear or whatever-- it's okay to feel that way.

No matter how you feel, you have no choice but to look forward to Super Bowl L.  It's the only thing that will wash that horrible taste out of your mouth.

We won't have the same team next year.  Dan Quinn is heading over to the Falcons to take over their operation.  Kevin Williams will probably retire. Who knows what's next in the Marshawn Lynch saga.  Will we be able to bring back Wilson, Wagner, Maxwell and the rest?  Who knows.

We know that we have a tremendous nucleus to build upon, but we also know there are plenty of holes to fill on this roster.  After Percy Harvin left, we had no semblance of a special teams threat.  We can't get by with Brian Walters next year-- we need some explosivity.

Dan Quinn will have to be replaced and we can only pray that he brings Darrell Bevell with him. Bevell is a huge reason for the slow start we got off to and apparently the mastermind behind the play that cost us our second Super Bowl title.

We'll save the speculation for the offseason.  I love these guys and I know  we're going to have a great, competitive team for years to come.  We should have had this one, though.  We let it get away.  This one will haunt everyone for the rest of their lives. But the only thing that will sooth that burn will be getting a shot at another one.

I'm ready for the ride next year.  I hope to see you all there.

Posted by Chris Collier at 9:05 AM