I was particularly excited about this game against the Cowboys.  I had the good fortune of being given a pair of club tickets right on the 50-yard line.  I took my girlfriend, an Oregon Ducks alum who had never been to an NFL game before.  I had told her that, while I was sure the crowds at Autzen Stadium were impressive, nothing could match the atmosphere of CenturyLink Field.

To tell the truth this Monday morning-- the Seahawks performance yesterday wasn't the only thing that disappointing me.

It had been a while since I'd made it out to a Seahawks game. As I said in an earlier post, because it's a pretty pricey experience, it's usually a once-a-year special event for me. The last game I had attended in person was Seahawks against the Patriots in 2012.  To let you know how long ago that was-- Earl Thomas still had dreads.

To tell the truth, 12s-- your performance yesterday was sub par.

I was incredibly disappointed with the lack of noise. I thought that maybe time had clouded my memory of what the 12s can bring to the CLink, but the fact that the Cowboys didn't have a single false start backs up my claim.

I know that its silly to fault the fans for a loss-- that's not at all the claim I'm making.  Perhaps it could've helped. Ultimately, Seattle's game plan was what lost this game for them.

Doug Baldwin complained after the game that there was too much talent on this team for them not to advance the ball better. While I agree, I have felt that the coaching staff, particularly Darrell Bevel, have been misusing their talent and putting them in unfavorable situations because of it.

Dallas did exactly what they have done all season.  Dennis Green would argue "They are who we thought they were!" They pounded the football on the ground to open up the passing game.  Why Seattle doesn't implement more of that in their offense is beyond me.

Instead, we've continued to run Percy Harvin up the middle with extremely limited results.  In fact, I can't think of a single play where we've ran Harvin inside that has resulted in more than maybe 6 yards.  Not only is it markedly ineffective, it subjects one of our highest paid, most talented players to unnecessary potential harm. 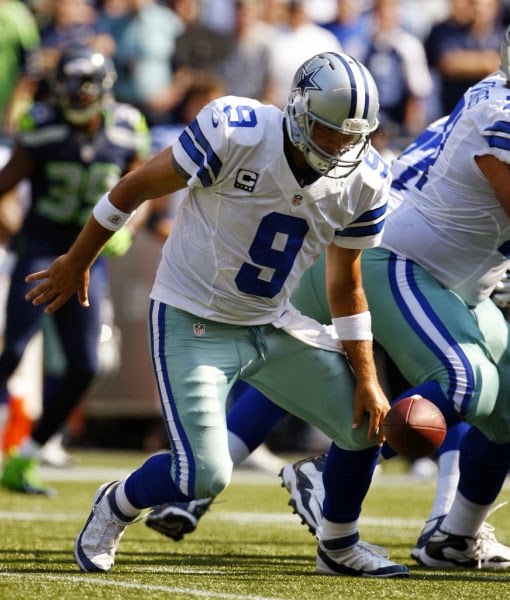 While 3 carries for -1 yards doesn't seem like much to attribute to a loss, Marshawn Lynch's 10 touches is grossly insufficient. It's as if Bevel has somehow forgotten how much Lynch's bruising run style had opened up their play action pass game over the past 3 seasons.

Dallas  possessed the ball an entire quarter of the game longer than Seattle.  To suggest that this had no impact on the outcome, as Baldwin did in the post game, is disingenuous. Had Seattle controlled the clock behind a steady Marshawn Lynch rushing attack and short, quick passes to his athletic receivers, they would've not only kept the game firmly in their control, but they could've opened up the playbook for more shots downfield and worked in some Harvin runs with success.

It wasn't just the Seahawks offense that looked overwhelmed Sunday.  Seattle's defense looked like they had no relation to the unit that led them to the Super Bowl the year before. Injuries definitely had an impact. Bobby Wagner, Kam Chancellor and Earl Thomas all shied away from the type of hits that have become their identity.

While I feel that there were tons of holding calls that were overlooked in the Cowboys favor, Seattle appears to sorely miss the production of Chris Clemons and the run stuffing of Red Bryant.  Even still, the defensive play calling had me pulling out my hair.  Whenever a running back would peel off his block and catch a pass in the flats, there was never a linebacker spying him.

Seattle must find away to get the best from the guys they have and put them in position to succeed. With the bye week behind them, Seattle must lean on its ground attack to take some of the pressure off its ailing defense.

Quick 3-and-outs are going to keep your defense on the field. If you're not getting any pass rush, your inexperienced and injured secondary will quickly be exposed. When that happens, you find yourself behind late in games, forcing you to throw the ball.  When defenses know you have to throw the ball, the can blitz at will.  When your most talented veteran offensive linemen are the ones drawing the bulk of the penalties, its hard to expect your line to play cohesively.

Seattle better rethink its strategy before they head to St. Louis next week or they will find themselves playing from behind in the division.
Posted by Chris Collier at 9:12 AM