Even though the preseason doesn't really count-- you know losing these first two games doesn't sit right with the organization.

Still, we can't panic this early.  There is definitely plenty that remains to be sorted out, but there's more than enough to be excited about. For starters, our secondary through these first two preseason match ups has been entirely made up of backups.  That really speaks to the depth of this team.

In these exhibition games, the goal is to evaluate the uncertain areas of your team.  No area on this team is as shaky as the offensive line.  They made some serious changes from last week, moving Justin Britt inside to left guard and brought in Gary Gilliam to start at right tackle. Drew Nowak got the start at center in place of Lemuel Jean-Pierre.

This semblance of linemen seemed to fair better than last week's crew.  The Chiefs have a dominant defense and what we saw Friday night felt like progress.  I'm not panicking-- we have time to sort this out. 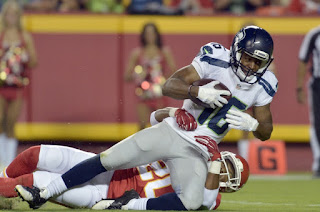 Young defensive players caught my eye all night.  DeShawn Shead is playing more like a veteran this season.  He encompasses many of the traits of both Chancellor and Thomas.  He'll continue to provide great depth for this secondary. Dion Bailey looks more and more like Kam's heir apparent with each game.  Hopefully, he doesn't take the throne anytime soon, but it's nice to see the development.  He plays with serious intensity and the swagger needed to be included in the LOB.

Perhaps nothing was more exciting than seeing the first flashes of how deadly Wilson to Graham is going to be for the foreseeable future.  Jimmy Graham made some outstanding plays in crucial situations for the Seahawks on Friday.  Nothing surprising, but it was great to get a taste of what we're in for.

There will be some tough decisions to make in the linebacker group when the time comes to trim the roster.  On the bright side, at least we can breath a little easier when we think about this more than likely Bruce Irvin's final season as a Seahawk. Kevin Pierre-Louis looks sharp. If he stays healthy and continues his development-- and maybe bulks up a bit more-- he could slide into Irvin's role without losing much production.  Bobby Wagner and KJ Wright continue to show why they are the greatest linebacker duo in football.

Tyler Lockette demonstrated that he's more than just a return specialist on Friday night.  He showed that he has the quickness and the sure hands to potentially develop into an effective slot receiver.  Kevin Smith and Kasen Williams would round out Seattle's receiving group nicely.

Thomas Rawls has impressed me far more than both Turbin and Michael.  I was hoping Michael would shine enough over these first two games to draw trade interest.  Unfortunately, Michael has yet to take the next step to show that he has potential to be an every down back.  He's flashed some explosiveness, but he lacks the consistency for me to believe he has much future with this team. Either way, this team will only keep two backs behind Lynch and it would be difficult to pass on Rawls.
Posted by Chris Collier at 8:10 PM