Despite the short week, the Seahawks managed to put on a display that was reminiscent of the team that won consecutive NFC Championships.  Sure, the 49ers looked abysmal and Seattle's pass protection continues to be a point of tremendous concern, but we did escape Santa Clara with a victory while only surrendering a field goal.

The Beast is back!  Marshawn looked to be every bit the runner we know him to be.  Lynch rushed for 122 yards on 27 carries and scored on the opening drive.  He did retreat to the sideline for the following drive as he vomited into a trash can-- but he returned to finish out the game.

Darrell Bevell just might be staring to get it.  We saw the Seahawks mix things up and display some of their adversity.  Russell ran the ball a few times, made the short throws we need to open up the defense and even stretched the field with deep throws, including a 43-yard bomb to Tyler Lockett.

Pass protection continues to be a glaring area of concern.  Russell was sacked another 5 times in this game.  The play calling is moving in the right direction, but we have to hope that Tom Cable can get this team to progress faster as we make our way to the season's midway point. 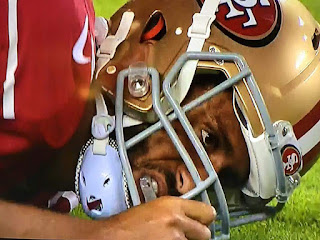 The defense looked playoff caliber.  Kaepernick was sacked 6 times while the defense allowed a
mere 142 total net yards.  Interceptions remain elusive to this defense, but to be fair, no one was catching Kaepernick's passes.

I'm anticipating that we'll look back to this point 2 months from now as the turning point for two franchises. The point of implosion for the 49ers and the turning point for Seattle.  I was just reading an article yesterday stating that Kaepernick's performance to this point, coupled with the stipulations in his contract, could force the team to bench or cut him to save millions in cap space.

The Seahawks have another achievable challenge ahead of them next week. They travel to Dallas to take on a beat up Cowboys team.  Obviously, they have to get out of there with a win, but even more importantly, they must show that they have overcame their issues in pass protection while showing how multifaceted they can be offensively.

They say that teams just don't fear Seattle like they used to.  Perhaps that is true.  But while we're not the same team we've been the past few seasons-- there is still plenty for opponents to fear.
Posted by Chris Collier at 9:59 AM