Just when we thought all the horror of Halloween was behind us, the Seahawks found the Jerry Dome to have some fright leftover.

Aside from narrowly escaping yet another blown 4th quarter lead, Seahawks receiver and one of the best special teams gunners in the league, Ricardo Lockette, was dealt a blindsided hit that left him unconscious on the field for a lengthy period of time.

Here are some update's from Ricardo's father, Earl:

Great to hear that Marshawn was by his side.  Hopefully this tragedy will bring the team closer together and Lockette's recovery will be full and swift.

On a brighter note, it seems that the defense is getting it's act together. Richard Sherman was outstanding, limiting Dez Bryant to a measly two catches for 16 yards.  Dallas was limited to under 100 yards receiving on the day and their only scores came on 4 field goals.

Still, this team must find a way to ignite it's offense. 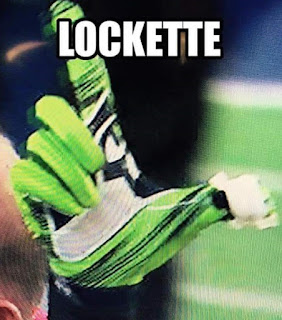 Darrell Bevell is the root of the problem-- but that isn't going to be resolved anytime this season, barring complete catastrophe. I know that Tom Cable could take any 5 guys off the street and turn them into a league-leading unit if he had enough time. Unfortunately, he doesn't, so we have to hope he can get this group going before the season ends.

Since those two major issues can't be remedied within the season, I'm going to lay this blame at the feet of someone who doesn't necessarily deserve any blame for the offensive woes-- but still is tasked with finding a solution.

I'm looking at you, Russell Wilson.


That's right. Our $87.6 million-dollar guy needs to be asked to do more of what he did to earn that contract in the first place. I'm not asking him to put himself in harms way, but in the same way this team leans on Kam Chancellor to lift up the defense-- the same should be expected of Wilson.

They seem to be carving out a role for Graham that fits their scheme, same with Tyler Lockett, but there is no reason Baldwin and Kearse have been ghosts for most of the season. A solid and diverse passing attack would do wonders for the run game, which is working out nicely with the three-headed beast comprised of Lynch, Jackson and Rawls.

The scheduling Gods couldn't have been more kind to the Seahawks this year.  They come home this week for their bye, followed by three consecutive home games. The team is still largely healthy and chocked full of talent.  If the coaches and coordinators can't find a way to beat two division rivals and a battered Steelers team before testing their mettle on the road against a Wild Card-contending Vikings team-- they don't deserve to be coaching in this league.

Keep Ricardo Lockette in your thoughts as he recovers.  The Cardinals are next on the schedule and we have a great opportunity to fight our way back to the top of this division.