It may have been Russell Wilson's 27th birthday, but he was the the one distributing the gifts.  Wilson had perhaps his finest game yesterday, throwing for 5 touchdowns and 345 yards.  The Seahawks were able to correct so many of the issues that were plaguing them this season while setting the table for a late-season playoff run.


As great as this victory was for this team, that's not to say that there wasn't a few negatives to take away from this game.  Jimmy Graham, who was finally carving out a role in this offense, is out for the rest of the season with a knee injury after falling awkwardly in the end zone.  Marcus Burley hurt himself again.  He has been playing really well this season, but he can't seem to stay healthy.  Our play-calling seem to have regressed from last game.  While it was frustrating, at least they were able to overcome some of the stupid play calls early in the game.

DeShaun Shead played remarkably in his first start at cornerback.  Big Ben picked on him, but Shead hung in their and played really well.  I would like to see more of Earl Thomas playing deep center field to protect over the top, but the defense overall bent without breaking.

Outside of Cliff Avril and Michael Bennett-- this team cannot pressure the quarterback.  Up the middle we get nothing from Jordan Hill, Brandon Mebane or Ahtyba Rubin.  Though, I should mention that Rubin has more interceptions this season than Carey Williams. 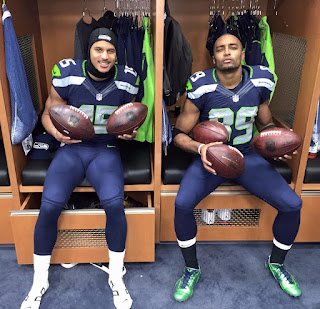 Seattle is preparing to embark on a two-game road trip that will ultimately decide this team's post-season mettle.  They might be able to make the playoffs while still dropping one of the remaining 5 games ahead of them-- but if they can't beat a tough Minnesota team on the road, the playoffs might be more than this team can handle.

Seeing Arizona eek out wins against a floundering Bengals team last week and a hapless 49ers team this week only adds to the frustration that came from not being able to close out that game in Seattle against them.  We'll see them again in the final regular season game, but by then, both team's fates may already be decided.

If Seattle can find a way to win this Sunday against the NFC North-leading Vikings, the following games against Baltimore, Cleveland and St. Louis should be a cinch.  This team is hitting its stride late and that's exactly what we need.
Posted by Chris Collier at 9:57 AM