The Seahawks are clicking in all phases of the game.  The Pittsburgh game last week was no fluke-- Seattle has now beaten consecutive playoff-caliber teams convincingly.  After starting the season off on shaky ground, this team is back to playing Seahawks football.

You don't have to look any further than the play of Russell Wilson over the past 3 games.  Had it not been for the erratic play that began this season, Wilson would not only be in the discussion for MVP-- he might very well be the front runner.

The offensive line is playing with confidence. We're spreading the ball around to the many playmakers on offense.  Thomas Rawls has filled in remarkably for Marshawn Lynch. Even Darrell Bevell's play calling has come into form. 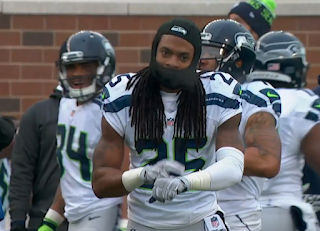 Don't let the score fool you-- this Vikings team is a good one.  They have a top defense that was

Thomas Rawls rushed for 101 yards and a touchdown on the day.  Russell Wilson's 51 yards on the ground was more than NFL rushing leader Adrian Peterson and the entire Vikings offense were able to produce-- and that doesn't include a 51-yard scramble for a touchdown that was nullified by a holding penalty.

The Vikings are a good team, but they are the exact type of team that our Seahawks are designed to beat.  Give us the best rushing team in the league with an inexperience/unproven quarterback any day and we'll shut them down.  The Seahawks defense finished the game with 4 sacks (two from rookie Frank Clark) an interception and a forced fumble.
playing without a handful of its best players and a run offense that is statistically better than ours.  The Seahawks are just finally showing that they are one of the top to bottom most talented teams in the league.

Seattle should have no problem running the table en route to the playoffs.  They have 4 games remaining and 3 of them are against hapless opponents with the final game being against the Cardinals in Arizona-- a game where Arizona is likely to have already clinched the division and could possibly be resting players for the playoffs.

On another note, I will be shocked if the NFC Offensive Rookie of the Year award isn't given to a Seahawks player.  Thomas Rawls and Tyler Lockett have both improved every week and have become integral pieces to this Seahawks offense.  Rawls is neck and neck with #10 overall pick, running back Todd Gurley.  I fully expect Rawls to surpass Gurley down the stretch of these final four games, but even if they're a pick 'em-- don't you have to give it to the guy that was passed on by all 32 teams in the draft?

As far as yearly awards go, this team's defensive MVP has to be KJ Wright.  Number 50 completely manhandled future Hall of Famer, Adrian Peterson,  in yesterday's game.  He's done that all year.  His contributions in both run and pass defense are unparalleled.

If the Seahawks can keep this pace up and stay relatively healthy, there's no question they will be the playoff's dark horse.  I can't think of one team in the league that scares me when the Seahawks are playing like they have over the past three weeks.
Posted by Chris Collier at 9:37 AM