Seattle finished it's final multi-game road trip of the season winning four games in a row and looks primed to lock up the 5th seed in the NFC.  The celebration was bittersweet, as we got word after the game that the injury sustained by Thomas Rawls on the first drive of the game would ultimately end the undrafted rookie's season.

This leaves Seattle with 3 games remaining in the season without the best running back in franchise history (Marshawn Lynch) and the guy who replaced him without missing a beat in Rawls. Ordinarily, this type of scenario would send a team into a frenzied panic-- but, somehow, this team feels like it will be just fine.

First off, Lynch is expected back at some point.  Whether that's before the playoffs or not remains to be seen, but from all we've heard, Lynch has not yet played his last game as a Seahawk. The loss of Rawls hurts, but we can pretty much expect him back next season when it's more than likely that Seattle parts ways with Lynch to create much-needed cap space. 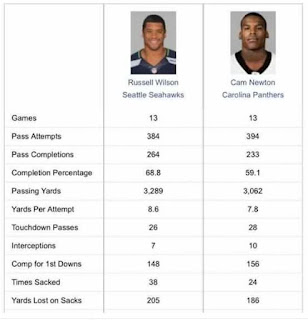 Perhaps more comforting is the fact that Russell Wilson is putting up MVP statistics.  Through the first half of the season, it was a forgone conclusion that Tom Brady would repeat as MVP given the Patriots then-undefeated record despite losing a remarkable amount of starters to injury.  The Pats hit a two game skid and Brady became less involved in that discussion.

Naturally, the focus shifted to Panthers QB, Cam Newton, who also is piloting an undefeated team that has faced some injury setbacks. However, if you look at the numbers in the graphic to your right, Wilson is edging Newton out in almost every significant category.

Along with Wilson, the offensive line, Doug Baldwin, Jermaine Kearse and Tyler Lockett are playing at a level we've never seen before.  The offense is winning games convincingly no matter who is in the backfield.

Once again, I have to give our offensive coordinator credit where its due-- especially given how many shots I've taken at this guy.  He called a brilliant game yesterday, given the circumstances.  Despite losing Rawls early, Bevell didn't deviate from the run game, nor did he belabor it.

Defensively, the team is clicking.  Any credit they get will come with the caveat that they've gone against lower-tier quarterbacks.  We can't control that-- all they can do is beat their opponent.  The only remaining, reputable quarterback on the schedule is a rematch with Carson Palmer, which may come at a point after both the Cardinals and Seahawks have solidified their place in the playoffs. Seattle will need to find another running back until we have more clarity on the Marshawn Lynch situation.  Fred Jackson can no longer act as a featured back and no one was impressed with what they saw from DuJuan Harris.  All indication points to Seattle bringing Bryce Brown back into the fold, which should suffice until number 24 is back in action.

The Seahawks have always played best when they have a chip on their shoulder, especially late in the season.  Well, the stars have aligned for us-- the Seahawks are playing their best football, they've been saddled with some adversity and despite Wilson's spectacular stretch of games over the past month-- people are still doubting this team.
Posted by Chris Collier at 9:30 AM