This year's playoffs started off strangely enough.  For the first time ever, all four road teams were victorious in the first slate of games. The Seahawks and Vikings match up was the 3rd coldest in NFL history-- but nothing was colder than how the game ended.

The Seahawks had largely outplayed the Vikings throughout most of the game.  Once again, Seattle's defense had shut down the league's best running back in Adrian Peterson. Seattle was getting decent production out of Christine Michael, who became the starting running back sometime Friday afternoon after finding out that Marshawn Lynch wouldn't travel with the team. We were out playing Minnesota, but not by much.

The game plan and play calling that Darrell Bevell brought out was once again head scratching.  The Vikings had made adjustments from the previous visit and did a much better job containing Russell Wilson.  The Seahawks QB was under duress for most of the game and the negative temperatures were clearly affecting his accuracy on deep throws.

Despite the ugly back and forth, Seattle found themselves with the lead late in the game and the opportunity to put it all away.

Seattle ended up with the ball and all but one of their 3 time outs with 2:13 left in the game.  These are the situations Seattle prefers to find themselves in when they have the lead late in a game.  A first down would have all but clinched the game, but Bevell's peculiar play calling resulted in a 3 and out that only depleted one of the Vikings time outs. 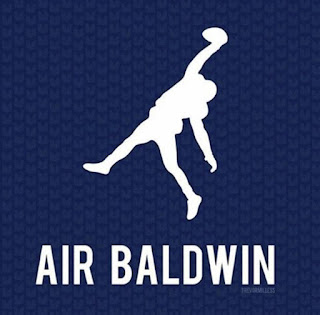 They began the drive 7 seconds from the two minute warning. On 1st and 10, this would've been

Seattle followed that up with a run for a yard that brought on the two minute warning and then failed to convert a 3rd down pass attempt to sustain the drive.  Like they had all game, Seattle put the outcome on their defense's shoulders.

There was a ticky-tacky pass interference call that never should've been called. The officials need to be reminded this week not to call non-flagrant penalties that could decide the outcome of a playoff game.  Still, after that penalty, Kam Chancellor got beat once again by a tight end and it looked like Seattle was doomed.

Seattle's best chance at taking a shot at an intermediate pass.  Some trademark Wilson scrambling might have taken the play clock right to the two minute warning, especially if it ended with a completion. Instead they ran up the middle for a modest gain that allowed Minnesota to use a timeout before the warning.

But that's when the improbable happened.

Blair Walsh, who had scored all 9 of the Vikings points in this game, missed a chip-shot of a field goal that set Seattle up for a game winning kneel down.

Michael Bennett and Richard Sherman were outstanding. Doug Baldwin made the catch of the year and the Seahawks collectively fought 'til the bitter end. It's a game that I just assume we put behind us immediately and focus on winning in Carolina next Sunday.

It was an ugly game, but we'll take it.