The Seahawks let their play do the talking-- and it spoke volumes.

The 2015 regular season is now in the books and the playoff picture is in focus. As flat as Seattle played last week against St. Louis, they needed a statement game to prove to everyone, as well as themselves, that they can win games on the road in convincing fashion,

The Seahawks seemed to have fixed the laundry list of issues from the week before. Seattle handed Arizona their worst loss of the season, humiliating them in front of their home crowd in Glendale. 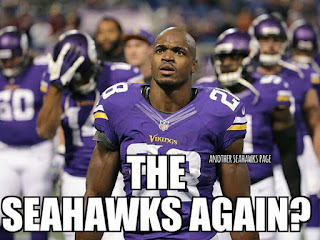 Those were great milestones for this franchise, but the most important thing we saw from the offense Sunday was a 102-yard rushing performance by Christine Michael. His story perfectly sums up the Seahawks season-- he gets cut from Seattle, bounces around almost right out of the NFL and comes back to help power this team into the playoffs.

That was perhaps the biggest thing Seattle had to prove in this game-- Lynch or not, we can still run the ball.  All signs are pointing to Lynch returning to the team on Monday and that is great news as Seattle prepares for a Wild Card match up with the NFC North Champion Minnesota Vikings.

As for the defense which was playing without Kam Chancellor, this game was the most visually dominating performance since Super Bowl XLVIII.  They looked fired up and made the Cardinals look perplexed and hapless.

Arizona will spending the next two weeks stewing on that ass kicking while the Seahawks are heading into Minnesota next week with a full head of steam.  The same Vikings team we destroyed 38 to 7 in Week 13-- in that very same stadium.

Seattle looks like the hottest team in the NFC right now and nobody wants to play them.
Posted by Chris Collier at 9:49 PM