The Seattle Seahawks championship window is far from closing, but last season revealed a myriad of minor but nonetheless legitimate deficiencies throughout the team.

The offensive line was a mess.  As it has in seemingly every season under Pete Carroll, it took weeks before we saw a cohesive semblance of an offensive line. In the two seasons prior to last year, the Seahawks were able to rally through the slow starts and reach the Super Bowl, but last year's sluggish beginning was more than the team could overcome.

Perhaps the biggest reason Seattle fell behind was not having Marshawn Lynch available down the stretch.  This coming season, we won't have him at all.

Couple those challenges with the loss of some outstanding contributors the team took this offseason.  No longer will we have the electric play of Bruce Irvin or the unwavering consistency of Brandon Mebane.  Suffice to say-- Seahawks fans had plenty of question marks heading into the draft.

At the conclusion of this years draft, most of my concerns were alleviated.  Pete and John were tremendous in addressing every area of need on this team.  Given the unpredictable history of their drafts, I genuinely did not know what to expect.  Where they going to get cute and take players they thought were the best available?  It was anybody's guess. 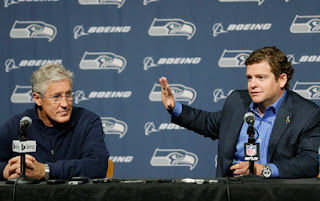 However, they drafted as smartly as they did unpredictably.  The Seahawks were able to trade back a few picks to allow Denver to get their QB of the future while Seattle acquired an additional 3rd round pick before selecting offensive tackle Germain Ifedi with the last pick in the first round.

Right off the bat, they picked up a valuable 3rd round pick and a player to join our weakest position group.

Seattle's next two picks addressed the losses of Brandon Mebane and Marshawn Lynch.  They traded up to grab DT Jarran Reed in the 2nd round and got an explosive, pass-catching playmaker in CJ Prosise.  Prosise will join Thomas Rawls in trying to fill the gaping hole vacated by Lynch.

The most interesting pick the Seahawks made came in the third round when they selected Ohio State tight end, Nick Vannett.  Vannett is a big-bodied blocking tight end who may have been an insurance pick in the case that Jimmy Graham's recovery isn't progressing as hoped.  Luke Willson is also a free agent after this season, so they may be looking to move on from him.

They finished the draft  by snaring two more offensive linemen, an additional defensive tackle, a pair of running backs after Prosise and a receiver who happens to be the favorite target of first overall pick, Jared Goff.

Overall, the Seahawks did a fantastic job.  Still, we'll have to see how it all shakes out before week one, but we can at least be assured that competition has increased at all position groups-- something that was lacking from the previous season.

Here's the list of upcoming events as we make our way toward the new season:

Here's a list of the Seahawks selections with links to their NFL.com Draft Profiles:

At the conclusion of every draft, the Seahawks sign a handful of undrafted free agents.  The Seahawks have had tremendous success with previous UDFAs including Jermaine Kearse and Doug Baldwin.  Here's who they got this year:

Posted by Chris Collier at 7:58 AM