Now, that's more like the San Francisco offense we were all expecting...

After impressively shutting out the Rams in their home opener, the 49ers began falling slowly back to earth in their week two loss to the Panthers-- before explosively crashing to the ground against the Seahawks this past Sunday.

The Seahawks held Blaine Gabbert to 14 of 25 completed passes with a measly 119 yards and an interception-- Seattle's first of the season. If anything, Gabbert proved that he has no business being an NFL starting quarterback and I personally was astonished that Colin Kaepernick didn't take over in relief at some point in the second half.

After a minor lull against the Rams, the Seahawks defense played up to their billing in this one.  Still, it was the Seahawks offense that had their homecoming on Sunday.

Russell Wilson looked far more mobile than he had the week before-- that is at least until he suffered a knee sprain in the 3rd quarter on a cheap and borderline dirty tackle by the 49ers Eli Harold.  Wilson went down hard on Harold's horse collar tackle as his knee caught under the defensive player's body while he was pulled down sideways by the back of his shoulder pads.  Grimacing in obvious pain, Wilson stayed down well after the tackle. 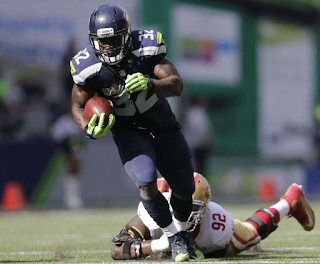 Travone Boykin came in to relieve Russell for a single play before Wilson returned to finish the drive.  Boykin took over on the next series and finished the game-- throwing both is first interception and first touchdown pass before all was said and done.

The franchise quarterback's injury certainly put a damper on the much needed offensive explosion,
but Wilson's improvement coming off of last week's loss wasn't the greatest revelation of the game. Christine Michael scored the first and second rushing touchdowns of his tumultuous career and finished the game with 106 yards on 20 carries.

With news coming out today that Thomas Rawls fractured his leg in last weeks game in LA, we can only take comfort from Michael's performance in conjunction with the improvement across the offensive line yesterday. Both Rawls and rookie CJ Prosise were inactive on Sunday, leaving all of the ground work to Michael and rookie Alex Collins.

Germaine Ifedi could potentially return for next week's match up with the Jets, but after Sunday's showing, I would give him another week of rest before the Bye week and let him come back in week 6. I cannot see the benefit to rushing him into his first game if we don't absolutely need him.  J'Marcus Webb played markedly improved from his effort against the Rams.

Wilson is expected to play on Sunday against the New York Jets and Boykin has some live-fire experience under his belt.  The defense is rolling and the offensive line and the passing game appear to be hitting their stride. As I said before the season even began-- my greatest concern is how this team will replace Marshawn Lynch.

I love Thomas Rawls as the next 12, but now more than ever, I feel justified in my concerns regarding his long-term durability.

After all-- we had only seen a small sample size of Rawl's ability.  Granted, we were all impressed with what he had put on tape. 830 yards on 147 carries while only starting in 7 games.  His aggressive running style was reminiscent of Lynch at a time before we even knew Lynch was in his final NFL season.  We were confident that we had found Beastmode Jr.

Believe me.  I was excited to have Rawls as our presumptive starter this season.  But with every ounce of excitement came an equal part concern, for myself.

We had been spoiled in our time with Marshawn.  A running back isn't supposed to carry your team for 5 years and consistently be considered among the 3 best at his position without missing so much as a game. When Lynch began to show the first, long overdue signs of wear-- fans were not very forgiving.  Part of that could very well be due in part to Rawls powerful emergence.

After the dust settled and Lynch had proclaimed his retirement, Rawls became our guy.  It's a far better transition than most teams get, but he hadn't even started a half of a season's worth of games before his ankle injury-- there was plenty of concern to be had.

Some of those concerns were eased when Seattle selected 3 running backs in the subsequent draft.  They drafted as many running backs as they did offensive linemen, which seemed to be an area of concern even more pressing since Russell Okung and JR Sweezy departed in free agency.  The Seahawks response in free agency was considerably less flashy with J'Marcus Webb and Bradley Sowell.

At that point, I was fairly pleased with how the organization handled replacing Lynch.  As the pieces began to shuffle around and come back together, my concerns crept back in.

As it turns out, CJ Prosise was brought here to be more of a 3rd down and pass catching specialist.  More of an answer to replacing Fred Jackson than replacing Marshawn.  Zac Brooks spent the preseason being consistently outperformed by Troymaine Pope-- both of whom are no longer with the team.

Alex Collins and his unofficial fan club president, ESPN 710AM's Mike Salk, had me fired up.  An explosive SEC running back?  SIGN ME UP! But in the days and weeks that followed the draft, Collins has done nothing to convince me that he'll ever be good enough to lead this team's rushing attack.

The only veteran this team brought in to compete in the backfield was their own failed, high draft pick.  If you would have told me Christine Michael was going to come back and assume the starting running back role back when Lynch first announced his retirement, I might have openly wept.

Alas, here we are.

Our quarterback is beat up and Thomas Rawls could be out the next 4 weeks. Christine Michael has performed admirably, but did cough up the fumble that cost the Seahawks a 3-0 record.  Plus, we're one injury away from Alex Collins and Terrence Magee being our only options in the run game.


So, what are we going to do about that? 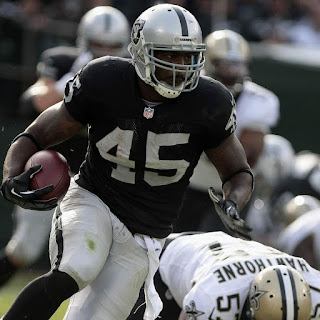 University of Washington standout and 4 time Pro Bowl fullback, Marcel Reece, was recently released by the Raiders. Given that the Seahawks have yet to settle on a fullback, I feel that the 31-year old fullback would provide an immediate upgrade to the rushing attack. His build, style and ability seem to fit well with Pete Carroll's scheme, too.

I know the Seahawks love to keep 'their guys' but it wouldn't hurt to bring in a veteran running back, too.

The offensive line showed excellent progress against San Francisco and I expect to see that continue next week against the Jets, despite their fearsome defensive front. We're in a position where we shouldn't have to rush Ifedi into the lineup until he's fully healed.

This early bye will greatly benefit the Seahawks this year.  They have had their bumps and bruises, but all teams will have their fill through the course of the season.  The offensive line will grow through experience, just as they do every season. They appear to be off to a faster start than usual. Christine Michael will need to be relied on as this team works through injuries and growing pains.  Russell will have to get the ball out of his hands quicker and the defense will have to keep playing to their ridiculously high standards.
Posted by Chris Collier at 6:19 PM