Through the first two weeks of the season, I can confidently say one thing about this team:

These Seahawks are NOT fun to watch.

Mike Salk from 710 ESPN Seattle described it best this morning when he said the Seahawks have been playing in 'Survival Mode'.  Call it what you like-- its no fun waiting to see which team will make the first mistake and who can capitalize on that mistake.

It's hard to lay any of the blame on the defense. Through the first two games, this team is allowing an average of 9.5 points per game.  I think most fan bases across the country would be happy with that number.

The problem lies within how this team was constructed. Here's a look at the top 11 highest-paid players on this team--  I did 11 because the kicker is in the top 10.
Provided by Pro-Football-Reference.com: View Original Table
Generated 9/19/2016.

Take Hauschka out of the equation and 8 of the 10 highest paid on this team are defensive players.  Essentially, your entire defensive secondary, 2/3 of your Linebacker group and your two most prominent pass rushers.

Your lone offensive stars on this list are Russell Wilson and Jimmy Graham.  Wilson makes absolute sense.  This team will live and die by his performances.  Graham's prominence in our cap allocation makes less and less sense with each passing week-- though, we should all understand the team's initial though process with this acquisition.

A mere glance at this list should give an ancillary picture of this team's MO.  They want their defense to keep you within one score before the final two minutes so that Russell Wilson can make just enough plays for Hauschka to kick a game winning field goal or perhaps for Wilson to find Graham in the endzone for the go ahead TD reception.

So far, that has worked fairly well.

But what if, say, Russell Wilson were to get banged up?  You know, from playing behind a shit offensive line?  What if we come to find out that Marshawn Lynch isn't quite as replaceable as we had initially thought?

Well, any coach worth his salt would make adjustments to the gameplan and lineup to accommodate for these worst-case-scenarios. One of the most glaring faults of this coaching staff is stubbornness.  I get that you want to own your philosophies, especially if you're hoping to get others to buy in, but if it ain't working, at some point, you have to go back to the drawing board.

It's times like these, in the aftermath of a 9-3 loss to a divisional opponent, where your offensive line couldn't stop a nosebleed, where I get real sick & tired of hearing about what a genius Tom Cable is.

This team has had tremendous success the past three seasons in spite of it's offensive line. At no point over the last few seasons has anyone gone on record saying anything positive about the way Coach Cable's unit has performed.

I suppose you could say that JR Sweezy's big deal in Tampa Bay points to Cable's ability to develop players but I think its lends itself more to bad teams raiding the trash pile of Super Bowl teams.

I cannot stand sweating out the initial months of the season, hoping and praying that some amalgamation of players on Seattle's roster will emerge as some semblance of a middle-of-the-road offensive line unit. Knowing that we always have a chance with the ball in #3's hands is comforting, but we all need to accept that there is a possibility that he will not be at 100% for the rest of the season.

While Wilson's 50% is better than most quarterbacks 100%-- it is laughably unreasonable to expect him to carry an offense on a broken leg with a turnstile offensive line and a running back group that appears to be without a leader.

Furthermore, if this defense continues to fail to create turnovers like they have thus far-- you're doomed. 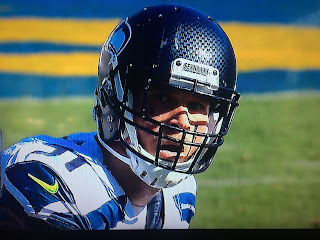 Richard Sherman said after the game that opponents are not going to provide as many opportunities for them to create turnovers if Seattle's offense isn't playing with the lead.  This is 100% true, but with the money this team has allocated to it's defense, particularly in the secondary, it's not unreasonable for us to expect them to create turnovers no matter the circumstance.

Perhaps the brass should have taken this into account this offseason and shifted some funds to the offensive side of the ball.  Would this team have found itself better off had they traded someone like Cliff Avril for a competent Left Tackle? I would argue that, despite Avril's tremendous pass rushing contributions, we could've been better served having a young, inexperienced pass rusher bookending Michael Bennett and getting a veteran to provide blindside protection to your franchise quarterback.

With the exception of Germaine Ifedi being injured-- this is exactly the offensive line group this staff CHOSE to enter this season with.  They were willing to go with 5 new starters and a new running back group-- even if it meant endangering the most valuable player on their roster.

Well, it's not paying off.

At best, we have to hope that they get their shit figured out by midseason in time to make a playoff run.  But will it be enough? If our run game continues to sputter and pass protection continues to get Wilson attacked and possibly further injured-- will this team have enough in the tank for a road playoff run?

The reason this makes me so angry and invokes 'the sky is falling' mentality is knowing that this team's window is still open.  As fans, we will have to live with the last minute interception in the Super Bowl against the Patriots for the rest of our lives. We will remember being about one drive short of beating the Panthers in the playoffs last season.  If Seattle fails to reach the Super Bowl this season, it will be considered a failure in my eyes.

This is the last season where this team's window is wide open.  It won't close next year-- but it will begin closing.  More and more integral players will have contracts coming up due to cash in on huge paydays the Seahawks may not have the space to accommodate.  Certain players who already have huge contracts will continue to age and the questions may arise whether or not they are playing up to their pay grade.  Guys will get hurt and every draft will not be the goldmine that was the 2012 draft.  It's just the way of the world in today's NFL-- it's part of what makes this game so great.

But the 2016 season is already underway and this staff needs to figure out how to get the best out of the guys they chose to enter this season with. Like the first two games of the season, the next two will also feature two tough defenses with questionable offenses.  Seattle needs to find a way to get their run game going, adjust their offense to accommodate Wilson's temporary limitations and their defense needs to not only find a way to create turnovers-- they're going to have to find ways to score.

After those two games, Seattle will have a bye week to get players healthy and figure shit out going forward. They won't have the luxury of starting 2-4 this season and having a shot at the Lombardi.  The Wildcard isn't guaranteed to come out of the NFC West this year.  Tampa Bay is chasing the Panthers in the South, Green Bay and Minnesota look neck and neck in the North and who knows what will happen in the NFC East.

The focus now shifts to the 49ers who are coming off a beatdown at the hands of the reigning NFC champs.  Like the Rams, the 49ers also have a hapless offense, but their defense seems to be playing much better under Chip Kelly than they ever did under Jim Tomsula. The Seahawks must score early in this game and keep their foot on the gas pedal.  Even a 7-0 lead in the first quarter would be enough for your defense to seize turnover opportunities that may win the game.

Changes need to be made to cater to this team's strengths.   The staff might have to swallow their pride and admit that they're not able to impose their will, but good coaches know how to maximize their players skill sets while masking their vulnerabilities.
Posted by Chris Collier at 10:27 AM