Under the prime time lights of Sunday Night Football, the Seattle Seahawks came into Foxborough and handled their business by defeating the NFL's hottest team.

It was a performance that fully displayed the promising depth of talent this team possesses.  With key players like Michael Bennett, Luke Willson and Thomas Rawls still on the mend, Seattle relied on its stars as well as bench players to secure the victory.

The return of Kam Chancellor did not go unnoticed.  This team is never better than when Chancellor and Earl Thomas are overseeing the defense and Sunday night was no exception.  Kam was making plays left and right, with Earl cleaning up anything left in his wake.

Thomas came flying in on a pass to Patriots tight end, Rob Gronkowski, and hit him with a
perfectly-timed shot to the chest that we later found out punctured Gronk's lung.  While an injury is never anything to celebrate, it proves just how much force can come from Thomas' seemingly tiny frame.

Russell Wilson looks about as healthy as I expected him to get before the offseason.  He put up career high passing numbers and found Doug Baldwin for 3 passing touchdowns.

Similarly, the offensive line looked to have had their best game of the season.  You can point out that the Patriots do not exactly have the best defensive line in the league, but they rank about middle of the pack.  George Fant has certainly taken the starting left tackle job away from Bradley Sowell, if you ask me.  He's a powerful dude with long arms and deft footwork. Sowell did absolutely nothing to impress me.  At least Fant has youth and a markedly higher ceiling. 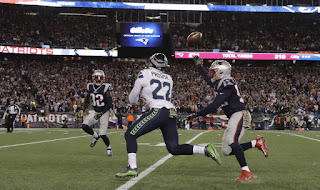 CJ Prosise might actually have a place on this team. We finally got to see more than just fleeting glimpses of why this organization drafted him.  He had a stellar performance in his first start.  He did so well, that, in conjunction with Rawls injury progression, the team decided to finally cut ties with Christine Michael.  Michael was picked up by the Green Bay Packers, so if he can hang on for a few more weeks-- we might see him again when the team heads to Lambeau.

Things are looking up for the Seahawks.  They are first place in the NFC West, #2 in the NFL Power Rankings and in line for the #2 seed in the NFC.  Rawls, Willson, Bennett and Sowell will be returning this season, many in the next week or two. Russell Wilson is coming back into form and there is a lot of promise for a stable rushing attack to begin developing.

The next test will be at the CLink against Philadelphia. Teams with strong defensive fronts have given this team fits all season, so this match up should not be overlooked.
Posted by Chris Collier at 4:23 PM