Happy Thanksgiving!  I'm a little behind in my writing with the chaos of the holidays upon us, but I did want to say that I'm very thankful for everyone of you that takes the time to read my thoughts on our favorite team.  It means a lot and I am very grateful. 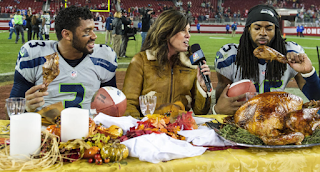 We're all thankful that our Seahawks have a commanding lead in the NFC West and only the Cowboys are ahead of us in the conference.

The Seahawks were astounding on Sunday in all phases of the game.  Russell Wilson became the first Seahawks quarterback to ever catch a touchdown pass on a remarkable reverse pass from Doug Baldwin. CJ Prosise scored the longest rushing touchdown ever made at CenturyLink on a 72-yard burst.

Unfortunately, the Seahawks came out of this game considerably banged up.

Prosise fractured his scapula-- this injury will likely keep him out until at least the playoffs.  Both Earl Thomas and DeShawn Shead pulled hamstrings that will hold them out for at least Sunday's game against Tampa Bay, perhaps longer. As of Wednesday, here's what the Seahawks reported from practice:

Did Not Participate in Practice
DE Michael Bennett (Knee)
RB C.J. Prosise (Shoulder)
RB Troymaine Pope (Ankle)
C Justin Britt (Ankle)
WR Tanner McEvoy (Toe)
TE Jimmy Graham (Knee)
LB Brock Coyle (Foot)
DE Damontre Moore (Foot)
CB DeShawn Shead (Hamstring)
FS Earl Thomas (Hamstring)
CB Richard Sherman (Ankle)
Limited Participation in Practice
LB Kevin Pierre-Louis (Hamstring)
Full Participation in Practice
QB Russell Wilson (Knee)
The Seahawks travel across the country to Tampa Bay where they'll face a gifted, young Buccaneers squad.  Despite the limitations brought on by injuries, this should be a game that the Seahawks can handle with ease. Tampa Bay has been struggling with their ground game and it would not be surprising to see the Seahawks defense get in the head of 2nd year quarterback Jameis Winston early and often.
The key for the Seahawks will be getting their run game going with Thomas Rawls.  Behind Rawls, Seattle will have the unproductive rookie Alex Collins and the unproven George Farmer with the possibility of Troymaine Pope being healthy.
The Seahawks must be thankful for their remaining schedule.  Every one of their remaining opponents has a losing record right now.  Despite the grim outlook of Wednesday's injury report, the Seahawks will be getting a lot of players back down the stretch.  They must find a way to brave these next few games in order to catch the Cowboys and clench home field advantage throughout the playoffs.
Posted by Chris Collier at 11:52 AM