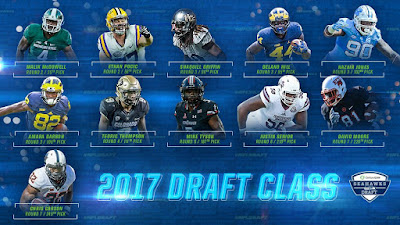 The 2017 NFL Draft is officially behind us. The Seahawks, as usual, did not make a selection in the first round.  This was truly a rollercoaster draft for Seahawks fans, myself included.

At the end of the first round, I was despondent and that feeling bled well into the second round of the draft.  Perhaps unlike last year, the Seahawks had legitimate needs to fill in their roster that went unfulfilled in free agency.

Seattle seemingly passed on potential starters like Kevin King, Reuben Foster, Jabril Peppers, Budda Baker and TJ Watt.  All of which I felt could have addressed an immediate need and became day one starters for this team. It was especially painful to see Baker land with a division rival and King go to the Packers, who many would say have been our chief conference rival over the past half decade.


We should all know by now that Pete Carroll and John Schneider march to the beat of their own drum.

As that drum beat on and the draft with it, I began to relax more and more. Seahawks addressed many of the areas of need with the wealth of picks they acquired by their trademark incessant trading back. They went hard after secondary help-- a huge problem down the stretch last season.

They brought in offensive line help and pass rushing depth, too. They even selected a few pass catchers and a running back to bolster the competition for starting jobs this offseason. With so many roster spots solidified over the last few years, competition has been lacking in the previous two training camps.  I would like to see some of these young receivers push Jermaine Kearse and Paul Richardson for their jobs.

Seattle was able to bring in 11 new players from the draft and 14 additional players coming into camp undrafted which will certainly fuel the competition Pete Carroll bases his philosophy upon-- I question their decision to pass on some top-tier talent.  It's possible they could've taken the guy they seemed to have wanted most (Malik McDowell) without passing on King or Baker.  I'm still scratching my head as to why they felt that Ethan Pocic was more valuable than say a Cam Robinson who could've started at Tackle, but we'll see how it shakes out in camp.

This upcoming season will reveal more from not only this draft class but the previous 2 or 3 as well.  Depending on where Seattle finishes this year, we can more accurately dissect Pete & John's draft history.  Will this be more like the early, homerun draft classes P&J had when they first took over?  Or are the Seahawks brass trending more toward mediocrity?

Only time will tell, but I can't wait for the regular season to begin!

Posted by Chris Collier at 9:30 AM