Colin Kaepernick's story is fascinating.  He's been polarizing ever since the 49ers selected him in the second round of the 2011 NFL Draft. He spent his rookie season in the backup role before winning the starting job the following season. In his first season as a starter, he lead his team to a Super Bowl.

There were no significant injuries, no incidents of substance abuse, no run-ins with the law or domestic abuse allegations.  Quite frankly, there wasn't even any decline in ability that might have lead to this former NFC Champion Quarterback finding himself between jobs. The only reason Kaepernick is not on an NFL roster today is that he spoke out on inequality in America.

Before I go any further, I have to admit-- I used to hate Colin Kaepernick. 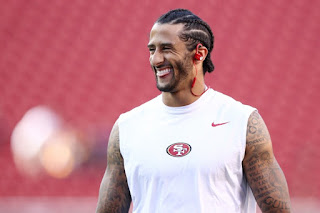 In fact, I enjoyed hating him.  Not just because he was the starting quarterback of my favorite team's greatest rival.  I hated everything about him.

From the shit-eating grin he flaunted with every play that resulted in positive yards to the corny Instagram pictures of his shoe collection, sports cars, and celebrities.  He was the perfect villain for Seahawks fans.  Russell Wilson was Charlie Church who spent his free time visiting sick children in the hospital-- the Batman to Kaepernick's Joker.

Another reason I hated him-- he was pretty good.

I never thought of Kaepernick as the ideal franchise quarterback.  I still don't.  I doubled over in Ron Jaworksi suggested that Kaepernick could be the best quarterback ever.  But there was no denying that Kaepernick was a tremendously gifted athlete.
laughter when

Those Seahawks/49ers matchups with Kaepernick under center were some of the best games to watch
for both teams fans.  They would not have been nearly as entertaining if Kaepernick wasn't talented and polarizing.

The 49ers self-destructed after Jim Harbaugh left.  It was no fault of Kaepernick's. If anything, he was the victim.  All of the talent left in free agency, they brought in two coaches that had no business being NFL head coaches, and they drafted poorly.  Soon, the 49ers had fallen to Rams-level obscurity as a rival and we couldn't realistically consider Kaepernick our arch nemesis holding a clipboard for Blaine Gabbert. Kaep had become an afterthought seemingly everywhere in the NFL world.

After a long while out of the spotlight, Colin Kaepernick's name re-emerged into the headlines. Not for anything related to the game of football, but for deciding he would no longer stand for the National Anthem during pregame festivities.

"I am not going to stand up to show pride in a flag for a country that oppresses black people and people of color," Kaepernick told NFL Media in an exclusive interview after the game. "To me, this is bigger than football and it would be selfish on my part to look the other way. There are bodies in the street and people getting paid leave and getting away with murder."

When I first read that statement, I thought "This isn't the same Colin Kaepernick I have spent the past few seasons hating."

This Colin Kaepernick has woke. It made me think that this guy who went from a high draft selection to the Super Bowl in such a short time, had experienced crushing failure for the first time in his professional career and began to take stock of his life.  Everything good that had happened to him so quickly seemed to vanish just as abruptly as it arrived.  He started focusing on what really mattered in life.

I'll admit-- I was apprehensive at first.

I thought, Alright, this guy has gone from conference champion to second-string, on a bad team, in the blink of an eye and now he's trying to keep his name in the headlines.

There was no way the guy that kissed his bicep after a big play suddenly gives a shit about anyone other than himself.

But, Kaepernick put his money (and time) where his mouth is.

He answered harsh questions about his decision sit/take a knee with respect and professionalism.  He gave out suits to parolees so they can get jobs. He donated $1million of his salary to help his community. He gave the proceeds from his jersey sales and helped bring water to areas of need.

Kaepernick had seemingly changed and grown as a human being. He was starting to win me over, but in the process, he had angered a vocal minority of NFL fans across the nation. My next question was 'Why is he doing this and why is it upsetting so many people?"

I've always been opposed to contrived, pointless rituals.  Like being forced by your mother to apologize to your sibling after a fight-- being forced to express sympathy, gratitude or allegiance under duress always struck me as supremely disingenuous.

Apparently, I'm in the minority with that sentiment.  Many 'fans' to this day are so upset with Kaepernick's refusal to partake in this out-dated display of nationalism, they couldn't be bothered to hear the message of Kaepernick's protest.

Kaepernick, in my opinion, made a great point.  Why would any African American willingly participate in the anthem, which itself has questionable roots? At a particular time where news feeds were flooded with numerous stories of police officers killing unarmed black men, it only makes sense that someone would eventually say "This isn't right. There is a glaring absence of justice taking place in this country."

When I try to put myself in the shoes of Colin Kaepernick or any other African American male living in the united states, it doesn't take long for me to comprehend and sympathize with their plight.  Imagine waking up every day and seeing your news feed awash with videos of people that look like you having their lives taken from them by people who your taxes pay to keep us all safe.

It happens so frequently, it can't be a fluke.  It's clearly a systemic problem that needs to be treated at the source. A national dialog needed to be started-- and Kaepernick's taking a knee did just that.

The opposition turns a deaf ear to Kaepernick's concerns and instead makes the argument entirely focused on patriotism and the troops that bravely defend our country.   That could not be further from the truth.  Anyone with a lick of sense in their head can see that Kaepernick's statement is not intended to disparage our service men and women in anyway-- he's merely using his celebrity to shine light on a glaring issue we have in this country.  That issue is the rampant abuse of power and shoot-first mentality, particularly when dealing with African American men, that takes place every day in this country.

It's an issue that should concern every person that wants to live in a free and civilized society.  Even if you don't experience that sort of prejudice yourself, you should be willing to listen to those that do without making it about yourself.

The term 'snowflake' is thrown out frequently by those on the right to demean those who express any sort of sensitivity toward a particular issue.  Ironically, the same people making these statements are often the same people that claim to be so distraught by Kaepernick taking a knee during the anthem, they suggest that they'll stop watching football altogether should he land on their team. 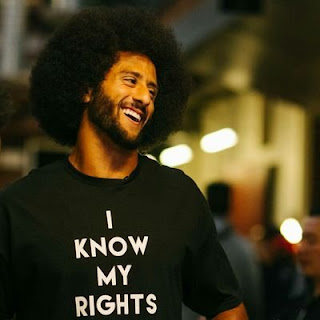 I certainly hope that we live in a society today that will give Kaepernick a second chance.  There is truly no reason for him to not be on a roster outside of the social issues he stands for. We have seen Michael Vick serve prison time for dog fighting and after a long road of redemption, he eventually was given a second chance.

We see players like Arian Peterson bounce back from child abuse charges. We've seen more drug, alcohol, and domestic abuses charges swept under the rug than I have time to list here.  How can someone who simply pointed out the flaws of our broken justice system be treated worse than those who actually caused physical harm to others?

Furthermore, I can point to a handful of players with greater skill deficits and weaker resumes who still draw paychecks in this league.  Mark Sanchez has been a disappointment for longer than Kaepernick has even been in the league.  Anyone named McCown seems to have a standing invite from every team to hold clipboard for millions per year.  Matt Barkley, Brian Hoyer, Geno Smith, Brandon Weeden, Drew Stanton, Matt Cassell and Kellen Moore are all on NFL rosters and not a one of them is as athletically gifted as Kaepernick, nor have any of them lead a team to the Super Bowl.

At this point, it appears unlikely that Kaepernick will be signed by the Seahawks.  Personally, in the unlikely disastrous event that Russell Wilson should miss snaps, I would prefer Kaepernick take the reins than Jake Heaps, Trevone Boykin or Austin Davis.  All four options would be drastic steps down from the production and play making ability we get with Russell Wilson-- but it doesn't take a rocket scientist to see that Kaepernick is the best option of the rest.

I went from hating Colin Kapernick to calling myself a fan of his.  It's silly to even consider what he did a 'failure' or a 'crime', because it absolutely is not.  Even if it were-- failure should not be permanent.  Some of America's greatest achievements came after a series of substantial failures. If we condemn failure so fiercely, we discourage people from taking chances-- chances that might have otherwise accomplished great things.

I believe many of the Kaepernick detractors have misplaced hate and I would love to interview them to get to the bottom of where it comes from.  The bottom line should be that we're all Seahawks fans that just want our team to succeed. Our loyalty is to the laundry-- not the human beings that wear it.  The Seahawks would be a better team with Kaepernick backing up Wilson than Davis or Boykin. That's plain as day to see.

I honestly can't fathom someone being so hurt by someone taking a knee during the anthem-- an event usually spent getting last minute concessions at the game or literally sitting on your ass in front of your home television-- that they would prefer their favorite team be worse off without them.