Buying a Jersey for Life

I'd like to consider myself an expert when it comes to buying jerseys. I've been wearing jerseys since
I was 7 years old. While they are no longer a part of my everyday wardrobe-- I still wear a jersey on game day, all these years later.

My first Seahawks jersey was Steve Largent's #80. Obviously, this was something that was purchased for me by one of my parents or grandparents, but it certainly would've been my first choice even then.  To this day, Largent's throwback is still a great choice for any fan to wear on Sundays. 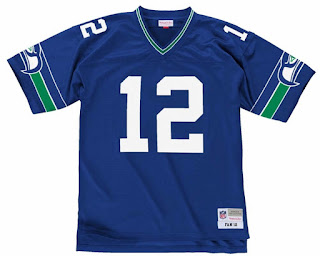 The first jersey I purchased for myself was Matt Hasselbeck.  I loved #8 and that jersey lasted me through the better part of a decade.  Like Matthew himself, this jersey is retired from my rotation. Both the Seahawks and myself got a terrific return on our investment.

When Hasselbeck left, I knew it was time for a new jersey. There are a lot of variables to consider when picking out a jersey. I wanted one that would last me, at a minimum, 5 seasons.  After all, anyone who has purchased a replica jersey can attest to how expensive these things can be.

Here are some tips to help you get the most bang for your buck with your Sunday apparel:

1.)  Pick a player that's going to be in the team's plans for the immediate future.

Longevity is difficult to predict in today's NFL.  With the average career lasting only about 3 seasons and free agency constantly shaking things up, it can be quite challenging.

Generally, quarterbacks are an easy choice.  Most teams in the NFL have a quarterback who is either in the developmental process, is an established veteran, or is otherwise under (a manageable) contract for the foreseeable future.

I got my Hasselbeck jersey in his second year as a starter.  I got my Russell Wilson jersey after his 3rd preseason game.  In both instances, I felt comfortable that the team was sold on the player being 'the guy' for a while. Fortunately, I was correct in both instances.

Conversely, don't buy a jersey of an aging veteran free agent that was brought in to 'win now'.  At every Seahawks game, you'll find a few suckers with a Jerry Rice or Percy Harvin jersey.  While it was exciting having those players at the time-- everyone knew there was a good chance they wouldn't last long.

Career averages can be drastically different from position to position. Couple that with the fact that team/player loyalty is at an all-time low, you'll find that there are a lot of variables at play. For example, Tom Brady just celebrated his 40th birthday and has has eluded in the past that his plans are to play well into his 40s. Meanwhile, he's probably had 20 different running backs start in his backfield.

The average career for a Running Back is roughly 2.5 seasons. Wideouts and Cornerbacks are closer to 3 seasons, but not by much.  So, outside of Kickers and Punters, Quarterbacks are typically the safest bet.

3.) Rookies are a slippery slope!

One way a rookie jersey is a safe bet is because they're immediately signed to an average contract of about 4 years, so it buys you some time.  NFL contracts aren't guaranteed, but organizations are typically more patient with rookies.

Still, you should proceed with caution before buying your rookie jersey.  It's always a gamble seeing if these young men can mentally and physically pick up the game at its highest level.  Many 12s excitedly purchased Aaron Curry's jersey when the Seahawks selected him with the 4th overall pick in 2009.  I can't say as I blame them.  Top five picks are among the safest bets among rookies.  Still, Curry quickly flamed out and fans were forced to get replacements or suffer the embarrassment of wearing the jersey of a major bust.

4.) You can always play it safe

Look, jerseys are a luxury-- being a die-hard fan doesn't require a uniform.  If you want to play it safe, that's totally understandable.  Seahawks fans have a privilege that other teams do not.  We have our own jersey.

In tribute to their fans, the Seahawks organization retired the number 12 in 1984.  The gesture was to show that the fans impact was as important as the other 11 men on the field, so no one will ever wear that number for this team again.  That means it can never go out of style.

Additionally, the Seahawks now have 4 players in the Hall of Fame which you can wear as a throwback.  Plus, it's always cool to see someone with a less memorable throwback like Joe Nash, Eugene Robinson or Dave Kreig.

Then again, if all you can get your mitts on is a Darrell Jackson jersey you scored at a thrift shop or a Shaun Alexander jersey you picked up at a garage sale-- that's cool, too.  Your fandom shouldn't be measured by how much you've spent on merchandise. Just root for your team, win or lose.
Posted by Chris Collier at 9:28 AM