The Seahawks didn't enter this offseason looking to rebuild or make any drastic changes.  The championship window remains wide open, but the team needed to replenish their depth.  It appears as though Seattle did just that. 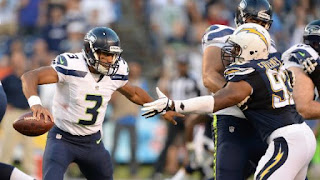 Seattle has had it's core group in tact for a handful of seasons now.  We've known for years now who to expect starting opening day at positions like quarterback, defensive end, cornerback, safety, etc. The issue the past couple seasons has been the depth behind those guys as the season drags on.

Injuries, big and small, hamper the team's efficiency down the stretch-- but even more important is
the need to look multiple seasons down the road.  There will come a time when hard decisions need to be made on contract extensions and the Seahawks need to make sure they are grooming young talent to push for those positions.

In Sunday night's preseason opener-- it certainly looked like the Seahawks have their deepest roster since the Championship season.

In all honesty, I have been concerned about the apparent lack of competition over the last couple of seasons. Much of the starting offense and defensive lineups were established just a few seasons in to the Pete Carroll era by hitting big on young, gifted and often inexpensive players in the draft and free agency. Maintaining competent depth behind those starters gets increasingly difficult with each season as more second contracts are established.

One area that was specifically concerning to me was our kicker.  Hauschka had been so reliable for so many years, but it was evident that the Seahawks would have difficulty retaining him under the salary cap.  I think many of us expected him to leave once the season was over.  With as many picks as the Seahawks had, I thought they could have easily 'wasted' one on a kicker and brought in a few veterans to inspire competition.

Instead, it appeared to me as though they handed the job to Blair Walsh-- most immediately recognized by Seahawks fans as the guy that missed a chip-shot field goal that sent the Seahawks to the Divisional playoff game in 2016.

Walsh has had a pretty successful career before that missed kick.  He was an All-Pro and Pro Bowler his rookie season in 2012.  However, after missing that potentially game-winning kick, he skidded into a slump.  He had a rough season last year, where he missed 4 PATs and saw a decrease in field goal percentage and was released by the Vikings.

Still-- I wasn't against bringing him in.  I just wanted him to 'earn' the job through open competition.

When I saw that the Buccaneers released Roberto Aguayo, another kicker with past success that is struggling with the mental side of his job, I mentioned on twitter that I'd like to see the Seahawks bring him in and kick the tires.

Suffice to say, I caught some backlash.


Walsh performed excellently last night and looked every bit the part. Obviously, I hope that carries throughout the season-- I would've taken no joy in seeing him struggle. That would've only stood to amplify my concerns.

From what we saw last night, there will indeed be some difficult roster decisions looming over the next few weeks.  Two areas that seemed thinnest just a season ago-- running backs and receivers-- now seem brimming with talented, young players that could start on any NFL roster.

Kasen Williams took the same path as Jermaine Kearse.  Local UW standout on a bad team goes undrafted but fights his way onto the Seahawks roster.  Williams largely earned his keep on special teams and the practice squad previously and every indication was that the drafted wideouts from the previous two draft classes would push him out the door.  Kasen put on a clinic last night, pulling down 4 receptions for 119 yards, just missing out on a couple of touchdowns.

I was really intrigued by David Moore, a 7th round selection from this past draft.  He's built like future Hall-of-Famer, Steve Smith.  Kenny Lawler looked much more pro-ready, having bulked up from his rookie season. Paul Richardson showed that he's going to be a huge playmaking threat, if he's able to stay healthy.

The Seahawks coaching staff would've killed to have this group of running backs available to them last season. It seems evident that Rawls and Lacy are going to be the staples of this group, but how it shakes out behind them is anyone's guess.

Chris Carson, another late pick, looks like this season's Thomas Rawls.  Mike Davis might have been our starting running back if we'd had him last year-- now, however, he might not even make the final roster. We've seen CJ Prosise do incredible things last year when healthy.  Well, he's healthy, so we better make some room for him.

The defense restocked the cupboards, too. There seems to finally be legitimate competition for the linebacker spot not occupied by Wagner and Wright.  The young cornerbacks will eventually find their footing and we seem to have a contingency plan behind Kam and Earl for once. I would've liked to see more pass rush, but hopefully that will come in time. Four turnovers is plenty to get excited about.

By far, the most satisfying takeaway from last night's game was the performance of our offensive line.  Pass protection was good for Wilson, Boykin and Davis.  Run lanes were there for the taking.  It wasn't just the presumed starters-- we might actually have some reliable depth on the line this season!

I know it's just preseason, but football is back!  The Seahawks are looking ready to contend and we're only a few short weeks away from meaningful football.