The regular season is so close-- you can taste it.

The Seahawks move to 3-0 in the preseason with another impressive offensive performance against one of the leagues most formidable defenses. We've seen marked improvement from one game to the next on both sides of the ball-- though, special teams did not have it's best performance last night.

Russell Wilson looks ready for an MVP campaign.  Not just because he appears healthy and at the top of his game, but because his weapons look more focused and generally more talented. Doug Baldwin looks elite and the duos chemistry has never been better.

I go back and forth every week on Jermaine Kearse's future with this team.  He is responsible for some of the greatest plays in Seahawks history, but in the NFL, 'what have you done for me lately?' is the collective mantra.  He is arguably the best downfield blocker on the team, but lacks the consistency of a Baldwin or Lockett.

The offensive line performed admirably in the absence of George Fant.  They are far from being established, but I feel much better this year than I did the previous season. Ethan Pocic looks like we can plug him in anywhere on the line and get decent production.

A week or two ago, if you had asked me about Chris Carson's future with the team, I would've told
you that he was making a strong case to be on this roster.  After last night's performance-- I'm starting to think this guy might be the starting running back against Green Bay. 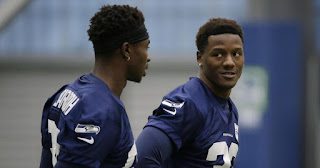 Thomas Rawls and CJ Prosise, two of the highest touted backs on this team, have largely been unavailable for most of the time that they have been apart of this team. When healthy, both look like they could start on any team in the league with Pro Bowl potential.  The problem is that they are seemingly injured more often than not.

Their continued absences have afforded more playing time to Carson, Alex Collins, Mike Davis and JD McKissic, who is himself making a case to be on the final roster. Collins looks vastly better than last season, but will be lucky if he finds himself on the Seahawks practice squad.  Davis has had a solid preseason and camp, but appeared to take a step back last night.

McKissic can play receiver, special teams and running back with an electricity unparalleled on this roster.  They have to find a way to squeeze him onto the roster in some capacity.

The 3 best backs on this team are Rawls, Eddie Lacy and Carson.  Rawls would ideally be the starter but we'd be foolish to bank on him like we did last season.  Lacy seems more of a change-of-pace type back but will see a healthy portion of touches.  With Prosise being a high draft choice last season and the potential he's displayed when healthy, it seems unlikely that he doesn't make the team, but I struggle to see where he fits, largely because of his availability.

Every week I fall more in love with this team's depth.  The depth of talent was, in my opinion, the greatest factor in Seattle's Super Bowl victory and the lack thereof has been their shortcoming the past few seasons. It is truly exciting to think about what this team is capable of accomplishing with not only the depth that was present during the Super Bowl season-- but added to that the experience that the veteran players have acquired since hoisting that trophy.

The sky is the limit this year and anything short of a World Championship will be disappointing.
Posted by Chris Collier at 9:49 AM