Generally speaking, the final preseason game is pretty meaningless and insignificant. Traditionally, teams rest most of their starters in preparation for the season opener and this game was used to determine which of the 75 remaining players would make the 53 man roster.

This year was different. 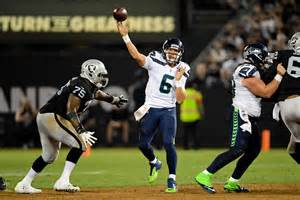 Instead of incrementally cutting the rosters from 90 down to 75 after the penultimate preseason game, rules were changed that eliminated that initial cut.  This gave teams an extra preseason game to evaluate an additional 15 players that otherwise would've been cut before deciding the 53 men that would represent the team in the coming season.

For those who suggest that the preseason is meaningless-- this changed everything.

Granted, my eyes are trained precisely on the happenings of our beloved Seahawks and not so much elsewhere in the league.  From what we all saw, we can definitively say that this rule change was an improvement. Certainly in the Seahawks case.

What we saw in Oakland clearly wasn't the polished product the NFL was known for, but there was no question that this game was significant in how the Seahawks roster cuts ended up shaking out.

Ultimately, it was a story of two quarterbacks vying to be the backup to Russell Wilson.  There were
some less obvious battles in both the running back and receiving areas of the depth chart, but the most evident competition was between Trevone Boykin and Austin Davis.

The Seahawks wanted Boykin to win the job, but they weren't going to give it to him.  He had to take it from Davis.  Boykin fits the mold of Russell Wilson-- an undersized, yet tremendously athletic scrambler with a knack for making plays out of thin air. Unlike Wilson, Boykin doesn't have it all between the ears and doesn't have the same dedication in film study.

Davis, on the other hand, is the quintessential 'game manager' teams seek out to be their back up. Should the starter miss a handful of games, the hope is he'll win you half of them, but he won't necessarily lose the game.  They'll shy away from attempting the big play in favor of ball security.

This game essentially spelled out what both quarterback's collective bodies of work have already told us-- Boykin is erratic and often reckless with the ball, but can occasionally strike gold with improvisation while Davis is merely the safest bet.

That's precisely how it went down.  Boykin threw a pair of costly picks while Davis slowly and cautiously led the team on the game winning drive. Davis earned the backup job and Boykin went unclaimed through waivers and found himself back on the Seahawks practice squad.  The hope is, he will continue to develop his skills within the team's system and eventually get his job as the backup back.
Posted by Chris Collier at 6:24 PM