The Titans played like the young, talented & hungry team we were told they are.  They played to their strengths and made minor adjustments as the game went on.  If only the Seahawks would do this-- they might be 3-0 today.

Instead, Seattle looks like a team with a major identity crisis. 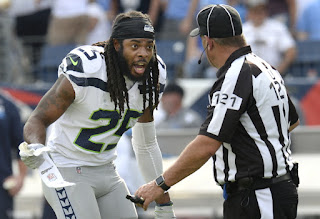 They want to be a run-first team, but the current personnel simply does not allow for that.  They seem to want to win every game 3-0 on the strength of their defense-- but that's simply not sustainable over the course of 16 regular season games and the playoffs.

It's not that the Seahawks lack for talent, that couldn't be further from the truth. It's just that the talent on their roster is not conducive to the identity they seem determined to uphold.

The defense started the game spectacularly but slowly fell apart as the game progressed, partially due to 100 degree temperatures with 97% humidity, but perhaps also due to how much they were on the field the previous two games. Conversely, the offense started the game flat but got rolling midway through, too little too late.

I want to give some credit to Darrell Bevell for the adjustments he made in game.  It took him long enough, but he finally started calling plays that keyed in on the offenses strengths. Most people credit the uptempo pace of the offense for these bouts of success, but I don't think that's the contributing factor.

When they play uptempo, they tend to be in 4 wide sets.  I feel like this opens up the field, which really helps the struggling offensive line and buys time for Russell Wilson. The offensive line played much better today and some of that can be attributed to these formations.

It's not time to panic, I get that.  We're not even through the first quarter of the season yet. However we're well beyond the time to face the hard facts that we are talent deficient across the offensive line. It is extremely unlikely that will change in this season.  It's insane to not accept that at this point considering it's been an issue for for the better part of three seasons now.

We have to spread out and throw the ball to open up the run game.  The run game needs to include Wilson, Chris Carson, CJ Prosise and even Thomas Rawls.  At this point, I might consider trying to covert Eddie Lacy into a fullback.

I still believe that the defense will be and needs to be the cornerstone of this team-- but you can't expect them to do EVERYTHING.  Especially not when you're paying your quarterback a small fortune.  If this team can avoid waiting until halftime to make the adjustments that play in to their strengths, there will be considerably less pressure put on their defense.