Getting in the Groove-- Seahawks 46 Colts 18

Despite a slow start, the Seahawks managed to overcome adversity and seemed to find themselves in the process. There are few teams as downtrodden as the Indianapolis Colts, giving this game all of the trappings for a Seahawks field day, but the Colts did not intend to be the Seahawks punching bag.

Seattle drew first blood with a field goal, but gave back two points when Russell Wilson held the ball too long and surrendered a safety. Justin Coleman came up with a pick six and gave the lead back to the Seahawks, but Jacoby Brissett marched the Colts right back down the field and Robert Turbin punched in a touchdown.

Russell Wilson had a pair of interceptions, both on passes to Jimmy Graham.  It could easily be argued that both picks were more Graham's fault than Wilson's-- but Russell has shown bouts of inaccuracy this year and I worry that it might stem from a lack of trust with his linemen.

My mouth was agape in dismay when the whistle blew for halftime and the scoreboard had the hometown Seahawks trailing by a five spot.  Jacoby Brissett was in the Patriots' quarterback meetings just two weeks prior. The Colts main running backs are a former Seahawk castoff and graybeard Frank Gore. What is going on here?

The second half of this game was vastly different. Seattle's defense gave up just 3 points in the second half and the Colts looked more like the team-in-flux that they are.

Wilson got his act together with an electric 23-yard touchdown scamper. He started to sling the ball around and make plays with his feet and it paid off big.  Wilson finished with 295 yards and a pair of touchdowns. 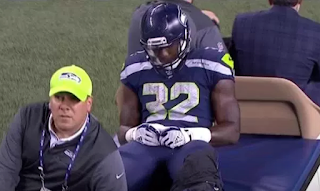 Unfortunately, the Seahawks starting running back is now lost for the season.

Chris Carson suffered an apparent broken leg late in the game that most likely put an end to what has been a tremendous rookie campaign.  Carson had been the only member of the Seahawks backfield that was reliably consistent.

It looks like it will now fall to either Thomas Rawls or Eddie Lacy to run the ball on early downs.

On the bright side, JD McKissic had breakout performance.  We had been hearing hype for a long time now about what a terrific playmaker this kid is-- well, put to rest any doubt about McKissic. He show's a unique versatility that leads me to think that the Seahawks could use him like Kansas City does with Tyreek Hill.

McKissic's debut was stellar, but that doesn't mean we've filled to hole left by Carson's injury. JD simply doesn't have the frame to sustain him running between the tackles 20 times a game.  He's going to be a guy we want to get out in space.

The offense showed signs of life, although it came against an unimpressive opponent. I'm going to focus on the improvements we saw, particularly in-game.  This team always starts slow.  We need to look for progress being made week-to-week and I believe we did.
Posted by Chris Collier at 6:09 PM