The Rams came into this game as the #1 rated offense, coming off a big win against the Cowboys in Dallas.  New coach Sean McVay seems to have his team poised to be a factor in the NFC this year. Despite the new coach, one thing that never changes about this rivalry is the physicality-- and this game was no different.

Earl Thomas had a remarkable performance that may single-handedly have punched his ticket to Canton. After the Rams ran at-will in the opening drive, Todd Gurley was once again denied via the Earl Thomas karate chop. 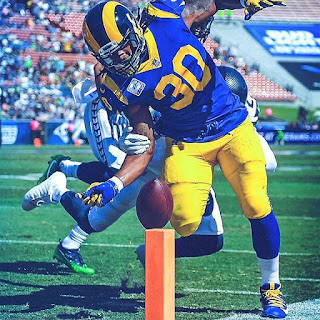 Seattle tried some trickery early-- a lateral to Tanner McEvoy that was bombed out to JD McKissic.  I loved everything about it, except that it didn't work. I hope this doesn't deter coach Bevell from drawing from that well again.  I think that's a play that catches defenses off guard more often than not.  The Rams defensive back made an outstanding play on the ball.

The Rams got the ball back and displayed why their offense is so highly touted. Jared Goff is markedly improved from last season.  He seems much more confident than his rookie campaign, but that could be due to the offensive additions provided to him this offseason. Gurley seems to be having a bounce back from his sophomore slump, but it was a carry from Tavon Austin that put the Rams on the board first.

Fortunately, Austin gave the ball right back to the Seahawks on a muffed punt.

In spite of the great field position, Seattle couldn't score.  Wilson threw an ill-advised pass that was damn near pick-sixed, if not for the speed of Wilson and McKissic to chase the defensive back down. The defense held the Rams to a field goal, but the Seahawks found themselves down 10 on the road.

The Seahawks had some fight in them for this one.

Russell and Jimmy rekindled their chemistry, connecting on the teams only touchdown of the day.  The offense adapted to what the Rams were giving them and managed to have a decent day against a really good defense.

The Seahawks defense were the stars of this game.  Earl Thomas had a clutch interception to go with his touchdown-saving chop.  Sheldon Richardson had an outstanding game, notching an interception and recovering Frank Clark's strip sack of Goff and rumbling 20 yards up-field with it.

I always complain when the schedule comes out and I find the Seahawks with an early Bye Week, but more often than not, it seems to help the team get right in the second half of the season. This year is no different in that regard.

Luke Joeckel is having a knee procedure, Baldwin and Sherman have been banged up-- and I'm not entirely convinced Russell hasn't been a little less that 100% healthy.  The team comes out of this bye with a relatively soft landing against a hapless Giants group that might have a worse offensive line than we do.
Posted by Chris Collier at 4:45 PM