Making Due with What You Have-- Seahawks 24 @ Giants 7

The Seahawks featured 4 different running backs on their first 4 plays of the game.  While it is nerve-wracking and aggravating that we find ourselves 7 weeks into the season with no idea who this team's leading back might be-- I love that they seem to be going with a committee moving forward.

CJ Prosise managed to once again hurt himself on his first play back.  At this point, I'm ready to shut him down for the season and call up Mike Davis from the practice squad.  Sadly, that's not my decision to make, so we will likely spend the next few weeks hearing Pete Carroll tell us how close Procise is.

Neither Rawls, Lacey or McKissic have come close to matching the consistency we were getting out of Chris Carson, but each of those backs have their own special skill set that could work well together when used as a committee.

I have been surprisingly pleased with coach Bevell and the offensive play calling the past couple of games.  It usually isn't until late November and on into December before this team comes to grips with their identity and begins to click together.

That's not to say the offense hasn't continued to struggle.  Seahawks receivers were dropping passes like they came straight from the oven.  Particularly Jimmy Graham, who inexplicably choked two potential scoring plays away in the game.

The offensive line had arguably their best performance of the season against a tough Giants defense on the road.  Unfortunately, Justin Britt may have sustained an injury that might linger through the year.  There were two scoops of good news that came from his injury-- he was able to return to the game and rookie utility lineman Ethan Pocic was able to get some experience at both guard and center in the game.

I have a strong feeling Russell Wilson is going to quietly work his way into the MVP discussion by the end of the year.  He's thrown 11 touchdowns to 3 interceptions so far this season and seems to be getting hotter by the week. 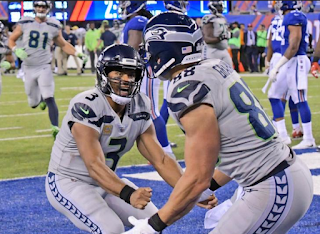 He owes a great deal of credit for his success to Doug Baldwin, who has been extraordinary this season.  He's been the team's most reliable playmaker, Wilson's security blanket and a quiet leader on and off the field.  Baldwin will probably never get the credit he deserves, but if this team can earn another championship while he's here-- it could be difficult to exclude him from the halls of Canton.

Still, this team is predicated on defense.  A remarkable defense that impresses so often, it becomes ordinary.  Bobby Wagner, Richard Sherman, Kam Chancellor and Jaran Reed were outstanding on Sunday.  Then again, so was KJ Wright, Justin Coleman, Shaq Griffin and more.  It's insane how great this defense is and how they've been able to sustain greatness so long.

The Seahawks have the Texans coming to town with a red hot rookie QB of their own. There has been considerable talk about the Seahawks doing a trade with Houston to acquire their left tackle, Duane Brown, who had been holding out all season.  The belief is that Seattle would be willing to part with Jeremy Lane, given their depth in the defensive backfield with the emergence of Griffin and Coleman along with the eventual return of DeShawn Shead from injury.

Brown ended his holdout on Tuesday and could potentially start his first game of the season against the Seahawks this week. I'm glad the deal didn't go through, because Brown only has 2 years left on his deal at almost $10 million per season.  He might be a 3 time Pro Bowler, but Seattle can't allocate that much cap space to him with so many contracts coming up at the end of this season.

Byron Maxwell was recently released, so I would not be surprised at all if Seattle does find a trade partner for Jeremy Lane that brings back an offensive or defensive lineman.  Dwight Freeny was brought in for a physical as a potential pass rush rotatory. Halloween is the trade deadline-- hopefully something ghoulish transpires between now and then.
Posted by Chris Collier at 12:25 PM