I woke up this morning fired up for Seahawks football.

A fresh new season filled with equal parts hype and promise.  Coming off of an undefeated preseason, restocked with talent and just about everybody healthy-- what's not to be excited about?

That was this morning. A lifetime ago. Now, it's about a quarter after 5 o'clock pacific time and I am absolutely fuming.

How could so much have changed in so little time?

The defense lived up to the almost unrealistic expectations that were put upon them.  Rookie Nazair Jones made a spectacular pick six that was called back on a pair of ludicrously inaccurate penalties called against the Seahawks defense during the return.  The aftermath lead to Jeremy Lane getting ejected from the game for throwing a punch that all of the broadcasting equipment failed to capture.

Shaq Griffin played admirably in Lane's place and the defense held Rogers scoreless for the rest of the first half, sacking him four times along the way.

However, just like last year, the astonishing display of offensive incompetence left them exhausted and unable to secure the victory against one of the best players in the league, in one of the most hostile road environments there are. That is a recipe for failure.

The offense was flat out putrid.  Embarrassing.  Painful to watch. 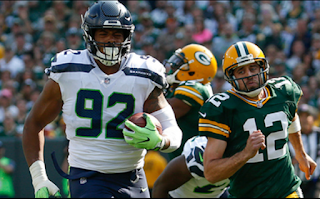 If I were Pete Carroll, I would insist that the offensive players buy dinner for the defensive staff every day next week.  They cost their team the win and jeopardized the health of the defensive players by subjecting them to almost double the amount of time on field as the Seahawks offense.

It was a game rife with missed opportunities. Russell Wilson missed on a few big throws that should have resulted in points, if not at least first and goal opportunities. Tyler Lockett looks to be at full health, but not yet on the same page with his quarterback. Jimmy Graham was off his game, as well-- though the officials certainly didn't do him any favors.

The Packers have to be feeling great right now. Not just because they won a hard fought competition against a perennial playoff team in the Seahawks-- they have to be rejoicing in the fact that they didn't make the grievous error of resigning Eddie Lacy.

The Seahawks signed Lacy to a one year, $5.5 million contract in the offseason while the Packers figured they were better off using a converted receiver to spearhead their run game. That former wide out, Ty Montgomery, had 39 yards receiving and 54 rushing yards with a touchdown. Lacy's 3 yards on 5 carries wouldn't even run him out of my living room.

Chris Carson is irrefutably the best running back on this team.  CJ Prosise has big-play ability, for sure, but lacks the consistency necessary to be a sustainable, full-time back. Carson runs with authority and is shifty enough to make defenders miss.  Lacy just doesn't have the explosiveness needed to compensate for the complete lack of run blocking from the offensive line.

I thought Germain Ifedi played pretty well.  The offensive highlights were few and far between, but there were flashes of promise.  Check out this play where Russell connects with Paul Richardson for 28 yards.  It was one of Seattle's biggest offensive plays of the day.

Go back and watch it closely, singling out a different offensive lineman with each viewing.  Justin Britt and Ifedi were the only linemen that executed their blocks.  Luke Joeckel, Rees Odhiambo and Mark Glowinski were merely turnstiles, only a minor inconvenience for Green Bay's pass rush.

The play was successful for two simple reasons: Russell got the ball out of his hand quickly and Paul Richardson is a tremendous athlete.

That is why I am infuriated.

Darrell Bevell's play calling is mind boggling to me. He seems to deliberately play to the offenses weaknesses.  It's almost as if he scripts the play calls for the entire game in advance, then refuses to deviate from it regardless of circumstance.

The argument could be made that we did not see enough of the starters, on both sides of the ball, in the exhibition games this preseason. The defense fought through dehydration and cramping that was suggestively brought on by the 'zero-to-sixty' intensity jump from limited preseason work to today's battle.

The offense looked totally out of sorts.  It's almost as if the coaches had their minds made up on some of those guys before we saw them truly battle tested. Tre Madden was a liability at fullback and the offensive line actually regressed from last season.

Chris Carson has to be the starting running back for next week's home opener against San Francisco--I can't stress that enough. If there is any credibility in the 'Always Compete' mantra, you have to give the guy the job. Sprinkle in some Prosise and even Lacy, but give Carson to bulk of the load.

I'm a firm believer in teams benefiting from early-season adversity.  The Seahawks get a soft landing at home next week and will undoubtedly bounce back, but we can ill-afford another season where the Seahawks take too long in the season to find themselves. We know we have a mobile quarterback with a great arm.  We have a litany of speedy, athletic, offensive playmakers to distribute the ball to.

Play uptempo, spread out the offense and wear the opposing defenses out while relying on the league's best defense to close out the game with the lead.
Posted by Chris Collier at 5:00 PM