The Seahawks won their home opener against San Francisco on Sunday, but it left a bad taste in my mouth.  I didn't want to write about it until I had sat with it a while.

Monday morning I still wasn't ready to dissect the game-- so I opted to listen to Howard Stern over Brock and Salk.

Around mid day, I was ready to break it down, so I queued up the Brock and Salk podcast. It didn't take long for Mike Salk to piss me off.

I like Salk.  We share a great deal of similarities.  Like me, his only real experience in playing the game was brief and didn't make it beyond the high school competitive level, but he applies logic to his years of being a die-hard sports fan to come up with terrific analysis with a fresh viewpoint from what you typically get from former players as talking heads.

Unlike myself, Salk is an avid contrarian.  He often takes the less favorable position, most likely as an effort to fabricate 'great radio'. That desired effect never works on me.

Salk is at his best when he firmly believes in the side he's taking.  Only when he has examined a situation from every angle and taken into consideration the comments from the opposition does he formulate his stance on a subject.  He's much smarter than I am and far more articulate.  When he's right, no one drives the point home quite like he can.

For some reason, perhaps in anticipation of the flood of calls and texts he would inevitably receive on the show that day about how abysmal the Seahawks offense looked, he decided to spice things up by trying to convince the nation of 12s (or twelfths, as Sam Rosen continually used to reference our fans on the game broadcast) that what we all witnessed on Sunday was pure brilliance.

He started the show by professing his love for 'Ugly Football'.  Now, in my book, ugly football is when two teams, often in inclement weather, are so well-matched that it's difficult for either team to get an advantage.  Big plays are few and far between and a lot of good defense is being played.  That was not at all what we saw on Sunday.

He went all-in on his contrarian stance by suggesting that Russell Wilson's performance earned the grade of a B+.  Brock Huard seemed privy to what Salk was trying to do and did his best to make a lane for Salk's madness.  Huard tried his damnedest not to challenge these absurd ideas from Salk, but couldn't bring himself to agree with any of the nonsense.

I'd love to be mad at Salk, but I know he's too bright to actually believe any of the comments he made yesterday.  His argument hinged on the fact that the defense was stout and that Russell Wilson was able to lead the team on a successful, game-winning drive in the fourth.  While both valid points, Salk was forced to severely oversell those points in order to ultimately tie them into his argument.

The defense played really well.  As they should-- they're responsible for the bulk of this team's salary cap.  They were also at home, which would give any team at least a 3 point advantage, but has been more of a 7 point advantage in Seattle.  They were playing a bad team with a new coach, new system and the most rookies of any NFL roster.

When you consider all of that, which I think you must-- the defense played good, not great. 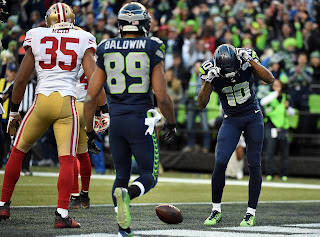 They flashed a stat graphic earlier in the game that showed that only 4 running backs have had 100 yard games against the Seahawks at home since 2012 (I believe).  Not only was Carlos Hyde one of those four, but he did it again in that game.  That's unacceptable to me. Not when you have the defensive talent of the Seahawks and you know full well that Brian Hoyer isn't going to beat anyone with his arm.

As for the offense, we did have some bright spots but let's not act like this performance assured us a spot in the NFC title game.  The offensive line took a small step forward.  Considering that the 49ers front seven is their greatest group-- that's worth celebrating.  Our line still has a very long way to go before they even reach the middle of the pack, but seeing any progress at this point is reassuring.

It also appears as though this team has found it's number one back in Chris Carson.  Eddie Lacey was a healthy scratch from the lineup, Thomas Rawls was a non-factor in his return from injury, and CJ Prosise failed miserably as a pass-catching, 3rd down back.  In a perfect scenario, the offensive line will continue to grow together and Carson's success will motivate the other backs to make the best of their opportunities.

Wilson did not have a good game-- but that is no reason to panic.  Brock put it best when defending his C grade on Wilson's performance by calling it 'uncharacteristic'.  He wasn't himself with regard to accuracy, but his receivers certainly deserve some blame for their drops.

A win is a win, I suppose.  It certainly could have been a lot worse. Still, this is a team with Super Bowl aspirations and a performance like what we saw on Sunday is not acceptable for a championship team.  For Salk to suggest otherwise is not only disingenuous, but borders on offensive to anyone that considers themselves a fan of the Seahawks and the Brock and Salk show.

Good teams will be criticized.  Great teams can handle the criticism.  We have every right to expect more from this team.  We should also expect that they will sort these issues out at some point in the season-- or at the very least, find a workaround for their problems.  They've done it for the past 5 seasons and this season should be know different.

However, we should all know by now that every game counts and we cannot afford to lose winnable games. Too many off seasons had us saying "If only they would've won that game earlier in the season, they might have had home field advantage in the playoffs."

There will be learning curves throughout the season, but this team needs to maintain a championship pace.  The next four opponents-- Titans, Colts, Rams and Giants -- are one of the softer pockets in the Seahawks schedule.  3-1 would qualify as 'championship pace' during that stretch that includes a division road game and two long trips to the Big Apple and Music City.  Anything less than that will put tremendous pressure on the second half of the season that includes match ups with the defending NFC Champs and playoff contenders like the Cowboys and Eagles.

It's crucial for Seattle to come away with a win next week in Tennessee.  A loss here would put this team on its heels and put an awful lot of pressure on the development of some of this team's less experienced players.  We need to once again rely on the strength of the defensive unit while asking our high-priced, veteran offensive players to take it upon themselves to put this game away early.