Not for the Fant of Heart-- Seahawks 20 Vikings 13

As the Seahawks were gearing up for the opening kickoff at CenturyLink Field to face the Vikings, I was heading to my end-of-summer-softball-barbecue. We had planned this gathering weeks ago and it never occurred to me that the Seahawks might have a game on that particular Friday night. 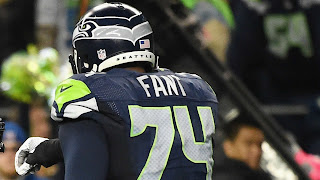 "It's only preseason." I told myself.

As long as I set the DVR, I was confident that my wife and I could enjoy our party and watch the game Saturday morning without any issues.

Not long into our gathering, I felt a buzz in my pocket and-- like the trained monkey I am-- I instinctively grabbed my phone to investigate.  I saw the ESPN update flash in my notifications.

My brain saw the word 'Seahawks' and connected the dots.  I quickly stuffed it back in my pocket. Later, I reached for my phone again to pull up something from Facebook to reference something we were talking about. I cleared my notifications, but I did see this before I could shield my eyes.

My stomach knotted up.  I put my phone away for good, knowing that whatever bad news was looming-- looking into it further at that point wouldn't accomplish anything productive.

When we got home late that night, we couldn't wait to watch the game.  We decided we'd fight through exhaustion and watch the first half, saving the rest for the following morning. We knew something unfavorable had occurred with regard to George Fant.  We knew it happened in the first half of the game.  We just didn't know the extent of what had transpired.

Watching the pregame with the benefit of hindsight was eerie.  Brock Huard and Curt Menefee were heaping praise on Fant's offseason progress and the unusual nature of his NFL journey.  It's not common for someone to come from a totally different sport, basketball in Fant's case, and walk on to an NFL team undrafted and start at left tackle-- one of the most challenging positions in the sport.

Fant was a guy we were all rooting for.  Earlier in the week, offensive line coach Tom Cable had declared that the left side of the line was set in stone.  Recently extended Justin Britt would be the Center, offseason free agent acquisition Luke Joeckel would play Left Guard with Fant manning the blind side tackle spot.  It was reassuring for a fan base that had watched it's team struggle to find continuity across the offensive line the past few seasons.

Huard was literally mid-sentence praising Fant's progress when he went down, clutching his knee in obvious pain. It was abundantly clear that a serious injury had just befallen our newly crowned tackle.

My wife had run out of patience.  She grabbed her phone and began searching for clarity on the injury that had by this point happened hours ago.

As we watched the team's training staff put Fant's leg in an air cast and cart him off the field, my heart sank.  I'm sure he knew in an instant that all of the hard work he had put in this offseason went up in smoke in the blink of an eye.

There was a lot more positivity to glean from this game than there were negatives, but Fant's injury was a black cloud over an otherwise great performance by the Seahawks against a top-rated defense.  Doug Baldwin and Russell Wilson were in late-season form.  Kasen Williams continues to make a case to be on the opening day roster. The depth of this team continues to impress.

Now we're back to the drawing board.  Seattle made a trade for Matt Tobin to compete with Rees Odhiambo to replace Fant, who will miss the entire season.  It's not that the loss of Fant throws the Seahawks Super Bowl hopes into turmoil-- I don't believe it does. Seattle has had worse to work with and made it work.  At least this injury occurred midway through the preseason, when the pool of capable players is deeper than it tends to be once final rosters are set and the season is underway.

What really sucks is that George Fant is a likable dude who had made tremendous progress toward  achieving an improbable goal-- only to have the rug pulled out from under him. He's young enough to bounce back from this and get right back after it next year, but you have to feel for him.
Posted by Chris Collier at 5:46 PM