Seahawks have problems-- and it ain't with the players

When Pete Carroll arrived on the scene shortly before this blog was created, people were amazed with his unique approach to running the organization.

Here was this guy, at the time the second oldest coach in the league, with this new, hip approach that seemingly went against every notion of the classic, hard-ass head coach archetype we had grown accustomed to.

We were told repeatedly that Pete's philosophy was that every individual's uniqueness would be nurtured and embraced, so long as they bought into the Always Compete & Win Forever mantras that were established in Carroll's days at USC.

Wouldn't you know?  It appeared to have worked.

Marshawn Lynch, whose career was beginning to sputter out in Buffalo, saw a tremendous resurgence once he landed with Carroll's Seahawks. To think that we got him for a 5th round pick seems laughable today.

Lynch wasn't the only unconventional athlete that thrived under Carroll's system.  Guys like Frank Clark and Bruce Irvin were thought of as thugs too risky to risk a high draft choice, came to fruition in Seattle.

The Seahawks went on to win one Super Bowl and narrowly lose a second under Pete.  However, the past season or two have seen the Seahawks show signs of inner turmoil that haven't really been addressed by Seahawks leadership.

Fast forward to today-- the Seahawks have traded Michael Bennett to the Eagles and there are rumors that Richard Sherman may have played his last game for Seattle. 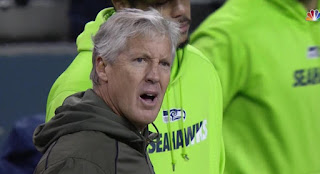 Again, as of right now, no one in the Seahawks front office has offered any clarity on the issue, but it has been mentioned that these moves were at least partially motivated by these player's vocal stance on social issues.

If there is even a kernel of truth to that statement-- I have effectively lost faith in the Carroll/Schneider regime.

You can't tell your team to buy in to a philosophy that encourages them to be themselves, only to turn around and tell them to 'shut up and play' because they took a stance on a polarizing issue that affects their lives both on and off the field.

Not only is that astonishingly disingenuous-- but its foolish on a whole other level when you consider the current state of the roster.

By my count, Seattle has 8 selections in the upcoming draft.  Most off which fall on the last two days of the draft. When all is said and done, the Seahawks could very likely find themselves without Sherman, Chancellor, Thomas, Bennett, Richardson and Avril from their defense alone.

I would bet my life that they won't replace that groups production from the draft this year, even if they completely ignore the offensive issues.

Seattle is preparing to enter the 3rd season post-Marshawn and nobody knows who will start at running back to open the season.  Evidently, it's Chris Carson, who, like Thomas Rawls before him, shined his rookie season in a small sample of appearances and is returning from a difficult injury. Rawls was never the same after breaking his leg, but unless Seattle takes a running back in the first round of this upcoming draft-- I'm forced to believe that they feel that was a fluke, rather than learning from their past experiences.

The offensive line is still a major concern.  I suppose we're hoping a revamped coaching staff will get better results from the resources we've thrown at the offense the past few years.  Again, I wouldn't count on that, but what do I know?

It certainly feels like the Seahawks have attempted to kill a spider with a flame thrower.  Instead of reloading, it looks like we're rebuilding-- which shouldn't be the case for a team that has a proven franchise quarterback.

To blame any of this team's recent shortcomings on the off-field antics of any player not named Malik McDowell is nothing more than an excuse. Pete's vague optimism was charming when the team was having great success, but it's starting to get annoying.

If Seattle misses the playoffs next year outside of a serious injury to Russell Wilson, it will be past due for us to stop mindlessly chanting "In Pete & John we trust!" and start demanding that he be more transparent with explaining his actions.
Posted by Chris Collier at 3:13 PM