I suppose I should write an end-of-the-year summation.

I just can't bring myself to do it.

The Seahawks entered Week 17 with their destiny in the hands of others. They needed to not only win their home game against the Cardinals, but they needed the Panthers to eliminate the Falcons.

As soon as the Panthers' lost-- the Seahawks season was over.

That wasn't the disappointing part. With the opportunity to still go out on a high note-- Seattle found
a way to lose to an Arizona team that trotted out their back up quarterback and a losing record.

Leading up to the game, Cardinals coach, Bruce Arians, made a comment in the locker room that was captured on camera where he suggested that CenturyLink Field is their home field.

Evidently, that bulletin board material and playoff hopes wasn't enough to motivate the Seahawks. 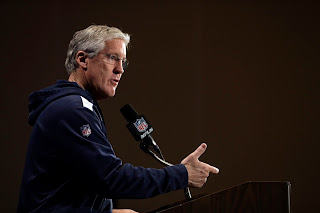 It was a fitting end to a season wrought with bad luck.  A season where nothing seemed to go as planned.  The problems started about this time last year.

The Seahawks ultimately decided that their solution to filling the hole left behind by Marshawn Lynch was signing Eddie Lacy to pair with Thomas Rawls, who was coming off of a broken ankle.

I said from the start that this was risky and insufficient. Lacy, when healthy, was declining in production.  Even behind Aaron Rodgers, who has made a career out of making mediocre backs look great.

Rawls looked great in 8 games his rookie season, but we had no reason to think that he'd produce at that level once healthy. Alex Collins hadn't shown any promise, despite making the Pro Bowl for the Ravens after getting cut.  Chris Carson was a 7th round pick-- who would've thought he'd end up the starter?

One of the teams I have been comparing the Seahawks against this year is the Minnesota Vikings.  Like Seattle, the Vikings had recently parted ways with a back that was legendary to their franchise. Minnesota's approach was much smarter than Seattle's.

The Vikings already had Jerrick McKinnon on their roster, likely drafted as an eventual replacement for Adrian Peterson. McKinnon never quite emerged as a starer, but like Rawls, showed flashes of promise.

They then brought in free agent Latavious Murray, but didn't stop there.  Early in the second round of the draft, they took the speedy Dalvin Cook. They covered all their bases in an attempt to replace a legend.

Also like Seattle-- it didn't exactly work out as planned.  Dalvin Cook looked like he was a runaway candidate for Rookie of the Year before his season-ending injury. However, the Vikings had sufficient depth to overcome the loss.

The Vikings had every bit as much attrition as the Seahawks.  Arguably more.  Yet, they were a game away from the Super Bowl while the Seahawks stayed home.

Now, the Seahawks are riddled with question marks heading into the offseason. They've already cut a ton of staff, including key personnel Darrell Bevell, Tom Cable and Chris Richard. 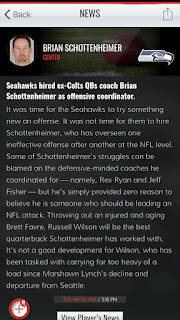 Their replacements were anything but exciting to Seattle's disappointed fan base. This report from Rotoworld (left) hits it right on the head quite eloquently.

Schottenheimer hasn't had much success to stand behind.  Despite the clear nepotism in play, most of the people that have worked with Schottenheimer rave about his dedication to the game.

Bringing back Ken Norton, Jr. to run the defense is more exciting.  Norton struggled in Oakland after leaving the Seahawks, but the Seahawks defense was never better than when he was on staff.

Another promising hire was Tom Cable's replacement, Mike Solari.  Solari is a proven offensive line coach with 30 plus years of experience.  As well regarded as Cable was, I never saw significant development from any of the linemen in his tenure.  Hopefully, Solari can provide a fresh perspective and scheme that helps keep our franchise quarterback clean.

It's not just the coaching staff that will look vastly different from the previous season.  Seattle has some difficult roster decisions to make for the future.

It has been suggested that the Seahawks will look to move on from Richard Sherman in the wake of his Achilles injury and the fact that he's entering the final year of his contract.  I think it would be incredibly foolish of the Seahawks to do anything with Sherman this year.

Let 2018 play out.  If he bounces back from injury anywhere close to where he was before-- try to resign him.  If not, let him test the free agent market next off season. Seattle has nothing to lose. Just don't handle his inevitable departure like the Giants did with Eli.

Similar tough calls will have to be made throughout the roster.  Should the Seahawks resign Paul Richardson or look to upgrade in the draft? Will the Seahawks be able to keep both Michael Bennett and Sheldon Richardson? Will Kam Chancellor or Cliff Avril ever play again?

Those questions will be easier to answer once the free agency period is underway and after the draft. The bottom line is that Seattle has a lot of work to do in order to get back to the playoffs. They will need to be active in free agency, trades and the draft to revamp this roster.  They have the most important piece of the puzzle-- but they have to do a better job building around him than they did last season.
Posted by Chris Collier at 8:30 PM