Seattle needed just two things to go there way to put themselves three games away from their 3rd Super Bowl appearance under Pete Carroll.

They needed to handle their business at home against a floundering division rival and they needed the Panthers to express some interest in winning their division by beating Atlanta.

Tampa Bay rallied to beat New Orleans, which meant that a Panthers win would give Carolina the NFC North title. Unfortunately, Cam Newton played like shit and the Falcons' victory eliminated the Seahawks from the playoffs, regardless of the outcome of Seattle's game.

Seattle, before a raucous home crowd, did what they had done too many times all season.

The committed too many penalties.  They failed to convert third downs. They started slow.  They played down to their competition.  They could not run the football.

I'd love to think that Vikings fans are having a good chuckle at our expense, but they're probably just enjoying their team's victory and dreaming of a home Super Bowl. 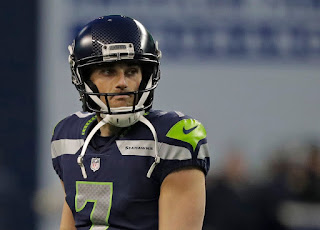 There's no doubt that the rash of significant injuries suffered by key personnel played a substantial role in Seattle's struggles this season.  I'll dig deeper into those when I write my end of the season review, but I wanted to bring them up now because I do not want to hear about them being an excuse this season.

Injuries are a part of the game.  Since it's a quarterback-driven league, unless your signal caller is knocked out for the year, the expectation is for you to figure it out and move on.

If anyone tries to peddle this BS excuse to you-- remind them that we just lost on our home field to Drew Stanton and the David Johnson-less Cardinals.  They were without their best player (Johnson) and their franchise QB.

Additionally, the Vikings lost their franchise QB last year to an injury that kept him out almost two full seasons.  They then traded their first round pick to acquire Sam Bradford, who was lost for the year.  Couple that with the fact that, when their franchise-leading running back, Adrian Peterson, parted ways like Marshawn Lynch did with us-- they didn't just hope that an undrafted kid would hop right in and assume the load.  They drafted Dalvin Cook, one of the top rated backs in the draft, only to see him lost for the year early in the season.

Now, Mike Zimmer could've made excuses for his misfortune.  He could have even sat out the year to recover from a serious eye issue that caused him to miss some time.  Instead, the Vikings made adjustments and now have a first round bye in the playoffs.

The Seahawks problems in this game were no different that their problems all season long-- and probably the past two seasons, as well.  Pete Carroll's belief in his philosophy is so steadfast that he seems blinded by reality.

I, personally, have completely bought in to Carroll's philosophy-- but it is nothing short of maddening to see them flat out ignore the cold hard reality of what is right in front of them.

The Seahawks were hit hard by injuries and had some preseason gambles bust on them. They are by no means the only team that can claim that hardship this year.  Good teams find a way to play to their strengths-- even if that means throwing out the game plan and starting from scratch.  There is no pride to glean from 'going down with the ship'.

But we were never without Russell Wilson this season.  Not even a half-injured Russell Wilson.  When you have a player like that on your team, there is no reason to not win ten games.
Posted by Chris Collier at 8:37 PM