Russell Wilson lives for primetime games in December.  Make no mistake about it-- this was far and away the most exciting game of the year.

The week leading up to this game had all the experts going against Seattle.  Even the staunchest of 'homers' believed the Seahawks to be outmatched by the NFL's top-ranked Eagles. Why shouldn't they feel the Seahawks were done?  After all, they are without Cliff Avril, Kam Chancellor and Richard Sherman.

The Seahawks, on the other hand, never had a single doubt.

Admittedly, I, too, was worried going into this game.  Not necessarily because of anything the Eagles do-- but because I know the Seahawks most difficult opponent has always been themselves.

My fears were put to rest after the very first play of the game when Darrell Bevell called a designed run for Wilson. The play only picked up seven yards, but it wasn't so much the result of the play that calmed me, but the statement that play made. Rather than cross their fingers and hope that Mike Davis was the answer to their rushing attack's prayers, they made a concerted effort to do what they do best.

The Seahawks basically said that they were going to play their brand of football and dared the young Eagles to try to stop it.

Seattle came away with a field goal on the opening drive, but it was enough to fire up the 12s and set the tone for the rest of the game. On their 3rd possession of the game, the Seahawks did what no other team had done this season against the Eagles-- they scored a touchdown in the first quarter.

When dumb penalties had become a consistent theme in Seattle's losses this year as well as their victories, you could tell early on that Seattle was executing at an extremely high level.  They played as if they had been preparing for Philadelphia for two weeks or more. 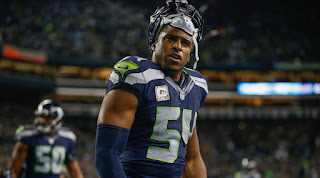 Seattle only committed 5 penalties all game. The offensive line seemed to have altered it's blocking style overnight, adapting a scramble-friendly style that provided protection while preventing bone-headed holding calls.  It was a hopeful sign that this line is solidifying just in time for the playoffs and meaningful December football.

The defense had been criticized all week.  They were told they were good, but that they simply could not be elite in the absences of Sherman, Chancellor and Avril. This obviously got back to the players, because we saw a colossal effort from the entire defense.

Frank Clark has made it to the next level.  He's shown that he can be the Chris Clemons of this year's team, recording two sacks and numerous QB hurries.  Quinton Jefferson is starting to come along, too. Byron Maxwell, Justin Coleman, Shaq Griffin and the rest of the secondary stepped up big in this game.

However there were three players on the defense that really stole the show.  Bradley MacDougald was lights-out with a dozen tackles, filling in for Chancellor. Still, this new amalgamation of the Seahawks defense belongs to and runs through it's veteran linebackers-- KJ Wright and Bobby Wagner. Those two are on a whole other level.

If Bobby Wagner isn't the Defensive MVP, no one is.

In private conversations leading up to this game, I said on more than one occasion that if Seattle doesn't win this game, there is no chance at them winning the Super Bowl.  While mathematically untrue, dropping this game to the Eagles would have been the 3rd home field loss for Seattle this year and would essentially confirm the national opinion that Seattle has not and cannot beat a good football team.

There's still plenty of room for improvement in these final four games.  Seattle has the opportunity this week to get a road win against an playoff-bound AFC team.  The offensive line needs to continue to gel while showing consistency.  We should even get some guys back like DeShawn Shead and Dion Jordan that will provide rotational depth.

There was plenty of praise to go around from the Sunday Night matchup, but one point cannot be stressed enough-- Russell Wilson was extraordinary.

Number 3 is the very definition of a Most Valuable Player.  Over 80% of Seattle's offensive production has gone through Wilson.  He is carrying this team and the sky is the limit.

A lot can shake up in the 4th quarter of the season.  Seattle could very likely win-out and find themselves in the top seed.  This loss could potentially send the Eagles into a tailspin of self doubt.  The NFC South should continue to cannibalize itself and we essentially control the Rams fate. As good as Case Keenum has been, I'm just not convinced that he has what it takes to lead the Vikings to the #1 seed.

It's December now.  This is when Russell Wilson, Pete Carroll and the Seattle Seahawks are at their very best.  Buckle up and brace yourselves for a remarkable final four games.
Posted by Chris Collier at 7:17 AM