It's Monday morning and Seattle has a record of 7-4.  Respectable, but far from intimidating.  Playoff projections show the NFC South claiming both Wildcard spots with the Seahawks on the outside looking in.  Only 5 games remain, but a lot can happen in the final month of the regular season. 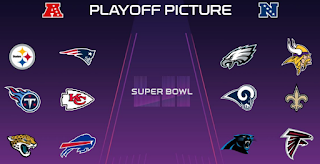 In their final 7 games of this season, Seattle will face 4 of the projected playoff teams.  They already lost to Atlanta and will next face the Eagles in Seattle, who possess the NFL's best record, on Sunday Night Football.

We now find ourselves 12 weeks into the season and it's pretty clear what team's identities, strengths and weaknesses are.  If you haven't figured yourself out by now, you're not going to this year.

After yesterday's convincing-yet-somehow-challenging victory, here's what we know about our team as they prepare for this season's 4th quarter:

San Francisco certainly appears to be heading in the right direction.  Their rebuild will continue for another season or two, but I expect this rivalry to heat up like it used to be. Kyle Shanahan isn't nearly as annoying as Harbaugh, but it could still return to being a preeminent rivalry in the NFL.

Seattle will need to win, at minimum, three of these next five games if they have any hopes of a post season birth.  It's still entirely possible that they could win the NFC West by beating the Rams and closing the gap in their records. Either way, the path to the Super Bowl will more than likely be a road trip for the Seahawks.  They will need to start making their case for respect by taking care of the Eagles next week.
Posted by Chris Collier at 10:55 AM