This was far and away Seattle's worst performance of the season.  It's arguably the most undisciplined and dysfunctional performance of the Pete Carroll era.  When you have a mediocre opponent like Washington that was as banged up as they were-- you must find a way to get the victory.

The Seahawks did exactly the opposite of that.  They went above and beyond to find a way to snatch defeat from the jaws of victory. With the lone exception of Niko Thorpe, the Seahawks special teams unit played like garbage. Jon Ryan didn't provide much in the field position battle and Blair Walsh choked on all three of his field goal attempts in the game. Add to that not one, but two missed 2-point conversion attempts and you have to wonder if Washington beat Seattle or did they simply beat themselves. 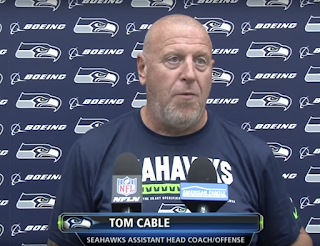 Russell Wilson had a bad game but not for lack of trying. He was just shy of 300 yards passing with a pair of touchdowns and 77 yards on the ground.

However, Wilson had two costly interceptions and the game-ending hailmary looked to me like it was picked off as well. Still, in spite of a lackluster performance, Russell Wilson is clearly not the problem with this offense.


It's high time we start laying more of the blame at the feet of this team's assistant head coach-- Tom Cable.

Coach Cable seems to evade criticism largely due to his reputation as a future head coach. To his credit, the run game has consistently ranked among the best in the league in his tenure here in Seattle, but has sharply declined since Marshawn Lynch left the team. He has seemed to coach up and make due with scrapheap guys-- but perhaps that was more to Lynch's credit than his own.

In today's game, Seattle came out with their newly aquired, All-Pro left tackle, Duane Brown.  Next to him at left guard was a second-round rookie, Ethan Pocic.  At center, we have another second-round draft pick and last year's Pro Bowl alternate, Justin Britt. The Seahawks signed free agent, Oday Aboushi, in the offseason and now he's your starting right guard. Starting at right tackle, you have second-year player and former first-round draft selection- Germain Ifedi.

That is a lot of  valuable resources provided to that group.  You can't begin to tell me that this team is neglecting it's offensive line.

Couple with that the fact that you came out publicly earlier in the week and expressed a profound commitment to feeding the ball to Eddie Lacy.  Lacy-- the same player you paid five and a half million dollars this offseason to take the lion's share of the touches for your offense.

You got your guys, you got home field advantage and you got an opponent that is without one of it's starting defensive ends. Take your quarterback out of the equation and your rushing offense only got you 71 yards today.

That is not acceptable if this team has any notions on predicating themselves as a running team.

So why haven't more fingers been pointed in Cable's direction when it comes to this team's offensive bouts of ineptitude? Darrell Bevell has taken a beating from the media and the fanbase-- and most certainly from me.  Still, Tom Cable is celebrated as an offensive mastermind.

I'll admit, I am guilty of overlooking Cable's shortcomings this season-- and maybe that is because of his past accomplishments. Now we have to get ready to play the Cardinals on a short week Thursday as we've given first place in the division to the Rams.  The Seahawks need to figure themselves out and do it quickly.

Cable definitely needs to be called out on 'Tell the Truth Monday', but he's definitely not the only one.  Since Chris Carson went down, Seattle only has one person on the team that hits the hole running full speed.  Sadly, he's not on the 53-man roster at present.  No, Mike Davis is still on the practice squad while every Sunday we act surprised to find CJ Prosise, once again, inactive.

Maybe it's time the Seahawks took a cue from the Colts and just admit that Prosise, like Andrew Luck, evidently needs the whole year to get his body right to play football.

McKissic is the most effective back on the team, but he can't take the full workload.  Meanwhile, Prosise occupies an extremely valuable roster spot that could be used by Davis to solidify our abysmal rushing attack.

Seattle is heading into a tough stretch of games in which they'll need to execute better in hopes of reclaiming the division lead.
Posted by Chris Collier at 6:19 PM