I can't remember the last time I felt this bad in the aftermath of a Seahawks victory.

They were able to win a road game against a bothersome divisional opponent.  Blair Walsh evidently snapped out of the curse that plagued him the week before.  Jimmy Graham and Russell Wilson seemed to have overcome their redzone deficiencies.

Those were the positives.  Few and far between.

The worst news of the night didn't even wait for the game clock to expire before breaking.  Richard Sherman went down in pain with what was initially called a heel injury, however, sideline cameras were able to capture Sherman mouthing the words "I tore my Achilles" and in another intimate conversation with quarterback, Russell Wilson, it certainly looked like he said "I'm done for the year".

Make no mistake-- this is devastating news.

Richard Sherman is, without question, the best cornerback I've ever seen. I've seen the greats-- Deion Sanders, Darrell Green, Champ Bailey, Eric Allen, Darrell Revis, Ty Law, Rod Woodson, etc. I have seen some great cornerbacks in my nearly three decades of football fandom. None of them are nearly as complete as Sherman.

There have been a lot of playmaking corners in that time, but none of them could (or would) tackle like Sherm.  There have been great tackling, run-stopping corners-- none of them were flatly avoided by opposing QBs.  Richard Sherman has been a shutdown corner, a fierce tackler, a community leader and one of the guiding voices in the Seahawks locker room

And he hasn't missed a game in his career-- until next Monday when the Seahawks take on the Falcons. 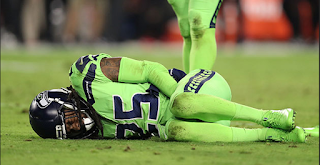 It's a devastating blow to an already decimated Seahawks defense. It was strange and unsettling when, at one point late in the 4th quarter, the Seahawks were completely without the Legion of Boom.

But the defense is far from this team's greatest concern.

This offensive line is horrible.  But that's nothing new to the Pete Carroll-led Seahawks, right? What is different with this year's group is that they haven't shown a lick of progression from game to game this year.

Every game starts the same-- failed running plays, 3 and outs, Russell Wilson running for his dear life.  The defense is forced to shoulder the load and Wilson is forced to exhaust the defense and make miraculous plays that, more often than not, give the Seahawks an opportunity to win in the closing moments of a game.

Week in week out. Things change, but they never get better.

We've always given Tom Cable a pass, as I wrote last week.  He won us a Super Bowl with guys like Breno Giacomini and Paul McQuistan on the offensive line.  Slow starts were quickly forgiven because the offense always seemed to begin to gel about halfway into the season before gaining momentum heading into the playoffs.

However, since that Super Bowl run, the team has clearly made more resources available to Cable and his offensive line.  They went out and got free agents that Cable most assuredly had a hand in bringing here.  Luke Joeckel, Oday Aboushi, Duane Brown, Matt Tobin, Isaiah Battle on the offensive line and Eddie Lacy in the backfield.

They've also used a number of their high draft selections on linemen. Germain Ifedi, Ethan Pocic and Justin Britt were all taken within the first 64 picks in their respective drafts.

With all of that commitment to the offensive line and running game, the Seahawks find themselves somehow worse for the wear. You could make the argument that Seattle seemingly doesn't excel at identifying offensive talent, but you'd be wrong.

That argument is immediately dismantled when you see that the tenth best running back in the NFL right now is Seahawks castoff, Alex Collins.

I don't think Collins registered a single, double-digit run in his tenure with the Seahawks.  He was clearly the odd man out in a seemingly crowded Seattle backfield. Yet, he gets scooped up by the Ravens, who themselves are struggling and riddled with injury, and has a career resurgence.

Did the Seahawks merely underestimate Collins' ability? Unlikely.   Every week, the Seahawks offensive line makes their opponent's defensive front look like world-beaters.  Even if that's not at all the case.

So, where is the disconnect?  It can't be entirely linked to the absence of Marshawn Lynch.  That excuse may have worked last season, but they have now had two complete off seasons to address Lynch's departure.  Somehow, their efficiency is even worse in the second year after Lynch.

It's one thing to have a talent deficit. That happens sometimes.  Guys retire, salary caps force roster moves and sometimes you simply strike out in the draft.

Sometimes you have your salary cap resources allocated to other areas of the roster that force your hand.  In those instances, you have to play the hand you've been dealt.

There are even times when a rash of injuries spoil your plans.  There's nothing you can really do about that. That's where the 'next man up' philosophy comes from.

Even in those extreme situations, your job as a coach is to get the best out of the group of guys you have. Coach them up and help them get better week to week.

Cable has not done that at all this season.

Darrell Bevel has made adjustments, in games and throughout the season, that have helped this team win games and stay competitive each week. That hasn't always been the case in previous seasons, but he's been outstanding this year when it comes to doing the best with what he has.

Even the penalties are different from previous seasons.  I could live with the nasty, personal foul penalties we'd see from Giacomini and James Carpenter, but these false starts and holding calls are killing this team.  The bottom line is that this team will not win a playoff game if they can't sustain drives with the run.

I don't know enough about coaching or offensive line play to discern whether these struggles can be attributed to the complexity of Tom Cable's system or not, but I've watched enough football this season alone to see that this is far from a league-wide problem.

Even the teams that go up against the Seahawks phenomenal defense seem to start strong, regardless of injuries or personnel.  The Seahawks line starts bad and finishes just as poorly.  Bevell adjusts the play calling, they abandon the run and leave it all on Russell Wilson to scramble wildly and make plays. Everyone else on the team makes adjustments and, more often than not, gets better as the game goes on.

Maybe I'm mistaken, but I don't know who else should be responsible for the embarrassing shortcomings of the offensive line if not the man whose job it is to manage that group.
Posted by Chris Collier at 10:20 AM