The reigning NFC Champions came in to Seattle for a prime time Monday Night showdown with major playoff implications on the line. Seattle was banged up and without two of their best defensive players, but the 12s had their back.  This game had all of the trappings for a great match up-- and if you didn't have a dog in the fight, it was a great one.

For Seahawks fans, it was rough.

The Falcons began the game by marching right down the field for a touchdown.  On the subsequent drive, Russell threw an absurd interception to local kid, Desmond Trufant.  Before you knew it, the Falcons were up two scores and things looked awfully bleak.

Wilson kept his team in the game throughout by making remarkable plays with his arm as well as his feet. This team will never be out of a game with #3 at the helm.  Additionally, I think we can say with confidence that this team has three legit receivers in Baldwin, Lockett and Richardson. Jimmy Graham might be the least physically dominant player in the NFL, but he's an athletic, rangy receiver who has evolved into a fantastic weapon for this team. 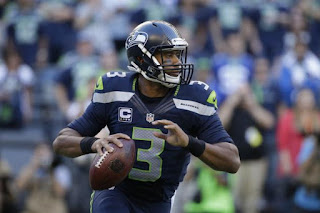 It's been disappointing how little production we've seen from rookie Amara Darboh. There hasn't been any evidence of marked improvement from him this season.  Tanner McEvoy, outside of a few special teams plays, has largely faded into obscurity.  This season, perhaps more than any other, we'll need to see the Seahawks receivers step up to make plays and win games. A specialty of former Seahawk Jermaine Kearse, someone will have to replace his production in big spots.

I had been screaming for Mike Davis to get called up for weeks.  He was off to a tremendous start in his first game as a Seahawk, only to hurt his groin and exit the game.  Unless Seattle is confident he will be able to return Sunday, they need to bring in some free agent running backs this week. McKissic has been pretty good and fun to watch, but we can't keep running him into the wall.  Similarly, I've had just about as much as I can stomach from Eddie Lacey.

I love trick plays.  I will typically defend all matters of unconventional play calling. The Seahawks ran a fake field goal wherein Jon Ryan flipped the ball to Luke Willson coming across the line.  Willson was devoured, almost immediately, by the Falcon's nose guard.

It was a stupid, stupid call.  Not because we were in field goal range. Not because we happened to lose by 3 points.  It was stupid because the Seahawks were out of time outs, it was 4th down and there were only 7 seconds off the clock. I might have been more supportive of the call had McKissic been the ball carrier, or if any of the circumstances were different, but I don't think there was any universe in which Luke runs by everyone for the score.

Seattle was already down its two best defensive backs going into this game. Just moments into the game, they lost their other starting corner, rookie Shaq Griffin.  The Seahawks played almost the entire game with a cornerback that joined them just days ago, and a corner they tried to trade away not two weeks ago. I thought both played admirably and gave their best effort.

You can chalk this loss up to coaching.  You can blame injuries. You can lay it on special teams.  You can call for Blair Walsh's head.  All of those things factored in to the loss, but far and away the biggest contributing factor to the Seahawks coming up short was excruciating penalties.

Sure, Wilson threw a stupid pick early that resulted in points and took a strip sack that was taken in for a touchdown.  But he brought you back and put you in position to take the game to overtime.  Yeah, the defense was banged up, but they largely kept the reigning MVP in check and made an important stop that set you up for a potential game winning/tying drive.

The team and coaches made mistakes, but for the most part, they overcame those mistakes.  But you cannot give up 100 yards in penalties every game and expect to win.

So, now the Seahawks find themselves on the outside looking in on the playoff picture.  They have to all but win out in hopes of getting a 1 or 2 seed, and that seems daunting with match ups against the Rams, Eagles, Cowboys and Jaguars ahead. Even a Wildcard birth might not be enough with the way this team has struggled on the road.

What can the Seahawks do to get right down the stretch?  Well, I think it starts with the offensive side of the ball.  I would like to see some free agent running backs brought in this week, especially if Davis can't go.  I think you have to bench Germaine Ifedi.  Even if it doesn't make you better right away, its the only way he'll ever learn to stop making stupid penalties.

I'd love to see the line on Sunday go Brown, Pocic, Britt, Glowinski, Joeckel.  Bench, or better yet, cut Lacey.  Start passing to set up the run.  Bevell's play-calling has been its best these past couple games.

Defensively, you gotta hope Shead can come back soon.  If not, let's see someone else take over for Lane. Neiko Thorpe has earned an opportunity or bring in competition from the street.  Dion Jordan had been great the past two games, but he'll need to take on much more of a role down the stretch to help the depleted secondary.

Above all else, this team has to execute better.  Front office, coaching staff and all the way down.  You can afford to be aggressive and make a few mistakes when you're at your best. This team is far from it's best.