The Seahawks, despite a lackluster offensive performance, managed to keep their postseason hopes alive in Dallas on Christmas Eve.

In an atmosphere that felt strangely like a playoff game, Seattle fended off the freshly reinstated Zeke Elliott and the Cowboys while the Falcons lost their game, keeping Seattle squarely in the hunt for the final NFC Wild Card spot.

The defense was able to shake off an abysmal showing against Los Angeles last week to hold the Cowboys to a handful of field goals. Largely due to having KJ and Bobby back in the lineup, but also due to the fact that Dak Prescott simply isn't that great. I admittedly haven't seen much of Dak's film but he did not live up to the residual hype of his rookie season.

I've watched enough of the Seahawks to know that our defense is in arguably its roughest shape since Pete Carroll arrived and they made the Cowboys look nothing more than ordinary on Christmas Eve.

The offense continues to look lost.  Even Wilson has played his way out of the MVP discussion, despite Carson Wentz being done for the year and Tom Brady having nothing to play for the final few weeks of this season.

Even with everything on the line and a relatively healthy offense, all Seattle has done to affect the MVP race recently was to put an enormous spotlight on Todd Gurley. 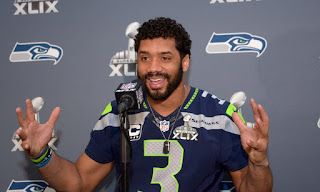 Nevertheless, we find ourselves with one game remaining in the regular season.  It's a home game, though that doesn't seem to hold the same regard this season.  It's against a crestfallen Cardinals team that has not only no playoff hopes, but will quite possibly be without Carson Palmer, Larry Fitzgerald and coach Bruce Arians next season. Also, the Seahawks destiny isn't solely in their own hands-- we need to not only win our match up with Arizona, but a Carolina win over Atlanta in order to play football in January.

Oh, yeah.  Even if all of that falls the Seahawks way, it's more than likely that they will have to play the Rams in the Wild Card game.  Sure, we beat them in LA, but the most recent game appeared to show that the Seahawks have no answer for Gurley and Goff.

I desperately hope that Seattle is able to reach their sixth consecutive post season, but I'm admittedly not terribly optimistic of their chances.  Not only to get in to the playoffs-- but what they might accomplish, should they get in.

If not for the majesty of number 3, this would've long since been considered a lost season for the Seahawks. Not only have the Seahawks been severe victims of attrition, but seemingly every gamble they took in the offseason has seemingly blown up in their faces.

I will undoubtedly have a lot to say when they season is ultimately completed for the Seahawks, but I will say this with confidence-- if the defense can perform anywhere close to its potential and the offensive line simply doesn't play its worst games in January -- Russell Wilson has the potential to win the Super Bowl.

There's just one guaranteed game left this season-- keep dreaming.
Posted by Chris Collier at 11:52 AM