Much Ado About Earl

It won't be long before training camp begins and preparations for the new NFL season are officially underway.  The Seahawks find themselves in a situation they haven't really been in since Pete Carroll took over.

It's not a total roster overhaul.  Not nearly the likes of what we saw in the lockout season.  It's a considerable turnover, particularly with names that had become cornerstones of the organization.  Reliable standbys that we had come to expect production from.  Particularly with regard to the defense.

Gone are the familiar names of Chancellor, Sherman, Bennett, Lane, Avril and Shead.  Guys that were tremendous contributors during both Super Bowl appearances.  Mainstays from the better part of the last seven seasons.

Add to that list our leading receiver, Jimmy Graham, who is now building his rapport with Aaron Rogers in Green Bay.

That's a lot of change, but it's nothing to lose sleep over.  We still have our quarterback, we have a first-round running back, revamped coaching staff and many other exciting new faces to watch at camp this year.

But one player remains uncertain.  Not just any player-- a legendary player. Of course I'm referring to Earl Thomas. 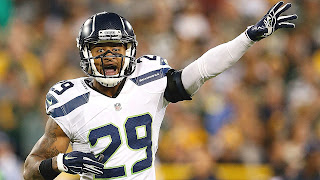 Ever since Seattle selected Thomas with their second pick in the first round of the 2010 draft, he's been nothing short of incredible on the field.  He plays his Free Safety position like a center fielder with a bomb strapped to his chest.  They just don't make a lot of guys like Earl.

He's been an emotional leader on the field and endeared himself to the fan base here in Seattle.  There is no doubting his significance to this franchise's history.

The question still remains-- what the hell is going on here?

On paper, Earl Thomas is signed through this season.  He's publicly stated that he wants a contract extension, and he's willing to hold out until he gets one. He's also made comments, often cryptically,  suggesting that he wants out of Seattle altogether-- ideally resulting in a return to his hometown with the Dallas Cowboys.

It began with Earl running down Cowboys coach Jason Garrett in the opponent's locker room, in the wake of the Cowboys loss to Seattle to tell him "Come get me, bro!"

Earl attempted to sweep this under the rug with a typical-Earl, disorganized collection of thoughts that did little to convince anyone that he wasn't stabbing his current team and fans in the back with his pathetic and unprofessional display post game.

Cliff Avril, who is now a sports radio host in Seattle on KJR AM 950, has since given us all a peak behind the curtain, saying that Earl's love of the Cowboys is well known in their locker room.

Leading up to the draft, it seemed inevitable that Earl Thomas was soon to get his wish.  Initially, it was thought that he would command a King's ransom, somewhere in the neighborhood of a pair of first round picks.  That eventually became a second round pick and a fourth.

On the last day of the draft, with no trade in sight, I assumed that this was all off season speculation.  Surely, Seattle has plans to extend their All-Pro safety so that he might finish out his career here in the Pacific Northwest.

Evidently, that was not the case.

From what I can gather, Seattle doesn't have any immediate plans to resign Earl.  In fact, they might not have any intentions of signing him beyond this upcoming season whatsoever. Additionally, the idea of trading him, whether to Dallas or somewhere else, might not be entirely outside of the realm of possibility either.

I don't use Instagram, but I have been told that Earl continues to pander to Cowboys fans through social media while he holds out from Seahawks activities. Whatever the team or Earl's plans are, it seems like the situation is going to get messy soon.

My question is, why on Earth would the Seahawks allow for this to happen?

We should all know Thomas well enough by now to realize that the notion of him humbly and professionally honoring the final season of his contract without distraction is ludicrous. It simply will not go down that way and everyone with half of a brain should understand that.

So, if the Seahawks don't want to sign him to another long-term contract, then why not get rid of him and recoup some value in the process?

We have seen the value for safeties seemingly plummet this offseason, so its possible that neither Earl nor the Seahawks organization are comfortable with the collective assessment of his worth.

I'm sure the Seahawks fielded offers leading up to the draft.  When he wasn't traded during the draft, I assumed that it was because they thought that the cost of extending him was better than the benefit of trading him.  But they didn't resign him.

Sure, if he finishes this season with us and gets signed by another team, it's likely that the Seahawks will find themselves with a 3rd or 4th round compensatory pick.  Maybe they were hoping they could get one more season out of him and still recoup some value once he's signed elsewhere.

Earl is demonstrative. Earl is vocal, although seldom coherent. He is bound to be a distraction if he doesn't get his way and the Seahawks simply do not have the veteran leadership in place to deal with that possibility.

Do the Seahawks seriously want to subject their young, revamped defensive squad to the sniveling tantrums of a spoiled veteran? That seems like a recipe for disaster that could easily setback this team's much needed development.

So, what should we do?

If I were calling the shots, I would've extended Earl before this happened.  I would've paid him as much as the cap allowed me to for no more than 3 seasons.  At the very least, that would appease Earl in the interim until I was confident that his heir apparent was on the roster and was able to negotiate trades without the player having all of the leverage.
However, if I were taking over right now as opposed to the beginning of this saga-- I would trade him immediately.  I would trade him to the highest bidder that is headquartered anywhere but the state of Texas.  Ideally, to an AFC team.  Anything above the compensatory price would be just fine.

Earl is the last bit of adhesive on the dangling band-aid that was once the LOB.  Why not rip that sucker off in one fell swoop and move forward?   The departures of Kam, Sherm, Lane and Shead were difficult for all Seahawks fans in different ways and to varying degrees.  Losing Earl isn't going to be easy, but it will be a lot easier to swallow if we can collectively grieve these losses.

Right now, the Seahawks are dragging this out to the benefit of no one.  Let's not make this difficult situation extend into next year.  If the team doesn't want to pay him long term and he doesn't want to be here-- the decision has already been made.

We'll never forget Earl Thomas and all that he's meant to this team, but we'll have to get over it.  The Seahawks seem to be at their best when they're trusting in young talent to make the next step.  Don't make this divorce any uglier than it needs to be.

Posted by Chris Collier at 2:40 PM