When I hear Steve Raible's voice-- football is upon us.

I know that it's only preseason, but I liked what I saw last night.  This team has a lot of new faces.  It was the first time in a very long time, perhaps since Pete Carroll initially took over and turned the roster out, where I found myself longing for a media guide. 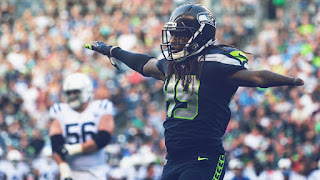 So much talk has been centered around those who will not be with the team.  It's definitely worthy of discussion, but lost in that noise is the imbibing of youth that became of those departures.

We can remember so easily how fearsome our team was with names like Chancellor, Avril, Bennett, Thomas and Sherman roaming the field.  What is often forgotten is that those names did not enter our lexicon until Pete & John blew up the Seahawks roster, started from scratch, and allowed for those young & hungry players to have an opportunity.

Last night reminded me an awful lot of those early days.

That's not to say I didn't have my share of concerns, but I am considerably more optimistic than most when it comes to the Seahawks chances this season. I've seen predictions as low as 3-wins and the highest being 9-wins.  The general consensus leans a lot harder toward the 3 than it does to the 9.

I'm picking the Seahawks to go 10-6.  That's been my stance since the conclusion of the draft.

I understand why so many are concerned and therefore picking the Seahawks to find themselves lucky if they win 6 games.  Earl is as good as gone.  No Kam, No Sherm, No Cliff.  That's a lot of production lost.

However, correct me if I'm wrong, but didn't the Seahawks play all of last season without Avril?  Didn't Chancellor, Thomas and Sherman miss considerable time?  My point is that we experienced just about all of those concerns last season with a garbage running game, an abysmal offensive line, a handful of games choked away by Blair Walsh, and awful play-calling to boot.

Guess what?  We still have Wilson.  Not only that, we have a full offseason with Duane Brown at LT, a first round running back, a healthy Chris Carson, new line coach and coordinator and a renewed appetite for success.

I think that's good enough to expect one more win than last season.

Last night certainly showed that the Seahawks are trending in the right direction in spite of the loss.  Here are a few of my quick takeaways from the game: