It's nice to know that I'm not the only one still struggling to accept the Chargers as residents of Los Angeles.

Curt Menefee, Brock Huard, Dave Wyman and the head official for the game all made reference to the San Diego Chargers-- despite relocating to LA ahead of last season.

The first thing I noticed was that, if this Charger team can stay healthy, they're going to be a force in the AFC.  Their defense looks stout and Phillip Rivers is still doing Phillip Rivers things.

The second thing I noticed was that our defensive line is going to be a problem.

No matter if it was against the Chargers 1's, 2's, or 3's-- our defensive front looked porous and every tackle was made by the linebackers or the secondary. 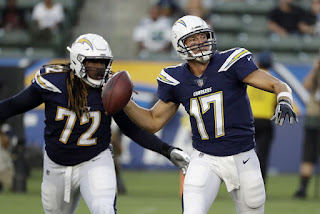 The Seahawks are going to need to find a solution for their defensive line so that the new-look secondary can find it's way without any additional challenges being provided by the lack of a decent front.

I think we're going to have an admirable rushing attack this year.  Mike Solari and Brian Schottenheimer have already shown demonstrable improvement through these first two games.

It was disappointing to see so little from Brandon Marshall with all of the hype around him coming out of camp, but not as disappointing as what we have and have not seen from Armara Darboh.  Seattle has 13 receivers on their roster at the moment and it's anyone's guess which 6 will stick.

Doug Baldwin and Tyler Lockett are locks.  Jaron Brown figures to fill the void left by Paul Richardson.  Brandon Marshall could very well be the 4th receiver, but I think we still need to see more from him in a game setting.

That leaves two spots for Damore'ea Stringfellow, who has looked sharp in camp and in games, David Moore, who has put together his second impressive preseason in Seattle, Amara Darboh, who Seattle invested a 3rd round pick in 2017, Cyril Grayson, the former LSU speedster, special teams standout, Tanner McEvoy, Marcus Johnson, who was acquired in the Michael Bennett trade, Keenan Reynolds, former Navy quarterback, and rookie free agents Malik Turner and Caleb Scott.

If I had to choose, I'd take Stringfellow and Moore while hoping to stash Reynolds and Turner on the practice squad.   If Marshall doesn't prove to be useful, I'd like to keep McEvoy around for his special teams acumen and emergency QB abilities.

Speaking of QB depth-- I felt that Alex McGough took a step forward while Austin Davis regressed. Evidently, Seattle was looking to add Colts QB Jacoby Brissett to the fold, even offering a 2nd round draft pick, but it never materialized.

I'm willing to admit that no one on the Seahawks roster outside of Russell Wilson is fit to quarterback and NFL team, I do think that there isn't much of a discernible difference between McGough and Davis.  I certainly wouldn't keep both but I do like McGough's developmental upside.

Ed Dickson remains no where to be seen, but his legend continues to grow.  I actually heard Wyman refer to Dickson as "the best blocking tight end in football".  This made me laugh out loud.  It's hilarious how player's can get better simply by not putting anything on film to suggest otherwise.

I remember the sports radio atmosphere the day we signed Dickson.  It was a collective head-scratching more than anything else.  This move was supposed to be indicative of Seattle's post-Jimmy Graham and Luke Willson strategy, and it certainly didn't look like we were getting anyone close to Graham's play-making ability nor Willson's versatility.

We were getting a serviceable veteran tight end that employs a block-first game plan but can catch the ball when called upon.  Unfortunately, he also has some nagging injuries.

Just like any year in the past 8 seasons, I think we're not going to fully know what we have in this team until November rolls around.  It always seems to take this team a few games to find their feet and really gel.  The good news is that it shouldn't take us 8 weeks to establish the run this season.
Posted by Chris Collier at 6:54 PM