Seahawks fell just short of a comeback victory in Minneapolis on Friday. Despite the loss, I was left feeling really good about what our team might look like when the regular season rolls around.

Minnesota is one of my favorites to make the Super Bowl out of the NFC this season.  Lead by their outstanding defense, the Vikings intend to improve upon their NFC Championship loss by adding Kirk Cousins to the mix. They also will be getting their 1st round running back, Dalvin Cook, back from missing all of last season with an ACL injury. They could be scary this year.

The Seahawks, who many analysts have only winning 4 games this year, looked good against a well-rounded Vikings team.  They ran the ball well, which was something they couldn't accomplish against any defense last season. Russell had all kinds of time to throw and a bevy of capable receivers on the other end of his passes. 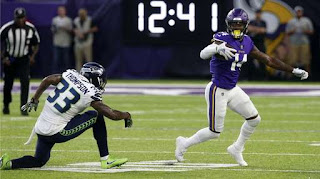 When I talk to other Seahawks fans, I hear a lot of concern about the defense.  Make no mistake-- the defense will look very different from what you've seen the past few seasons, but that doesn't mean they will be bad.

We've grown accustomed to a dominant Seahawks defense over the years.  One that imposes it's will on opposing offenses.  That sets the tone for the game.

If you're expecting more of the same-- you're going to be disappointed.

I still think the defense will be decent.  More of a bend-don't-break approach.  This will not be a year where we expect the defense to keep opponents under 10 points while praying that Wilson can orchestrate the winning drive in the 4th quarter.

However, they should hold teams to field goals more often than not and with the improvements to the offense, you would think the Seahawks will be better at controlling the clock and scoring.  So it should all come out in the wash.

Yesterday it was announced that KJ Wright might not be available for the opener in Denver as he gets treatment for a knee issue.  Should he be unable to play week one, that likely means that Shaquem Griffin would get the start in his stead.

That's by no means good news for the organization as a whole, but tremendous news for the Seahawks' rookie 5th round pick who may very well start his first game with his twin brother.

The NFL Preseason comes to a close Thursday and rosters will be trimmed down to 53 shortly after that.  I expect to see some league-wide trades go down this week, maybe even something involving holdout Earl Thomas.  Earl has really backed himself into a corner where he has no leverage.

Unless Earl reports before Thursday's game, he shouldn't have any shot at starting week one.  However, if he's not dealt with in one way or another before the season begins, he's only going to become more of a distraction.
Posted by Chris Collier at 11:08 AM