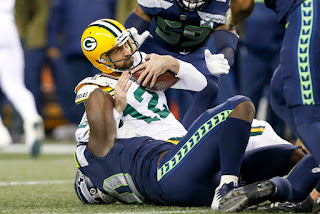 The talk leading up to last night's prime time match up was all about two teams fighting for their playoff lives.

A pair of elite quarterbacks,  post season regulars, trying to stabilize their respective franchises as they endure a retooling phase. The winner would remain in the Wild Card hunt while the loser would very much be on the outside looking in.


The game could not have gotten off to a worse start.

Chris Carson, returning from injury having sat out the previous match up against the Rams, coughed up the football on the very first play of the game.  The Packers inherited possession in prime field position, wasting no time in scoring the game's first touchdown.

If there are two things that are sure to give an opponent the edge over the Seahawks, it's forcing them to play from behind and taking the 12s out of the game.

The game was a little more than a minute old and Green Bay had already accomplished both of those things.

I love the Seahawks run-first philosophy-- it just doesn't work when you're playing from behind with a struggling, young defense.

Beyond that initial hiccup, Seattle's offensive struggles continued throughout most of the first half.  The difference was that the team never let the game get away from them. The defense kept it close as the offense gained momentum.

This was a huge game for many reasons beyond the playoff implications.  They beat a team with an elite quarterback. They closed out the game by asserting physical dominance with their offensive line-- a huge confidence builder.

Seahawks find themselves with a .500 record and largely in control of their playoff destiny. Four of their 6 remaining games are here in Seattle.  Three of those games (@Carolina, Minnesota, Kansas City) are against teams in playoff contention.

Next week's road game against the Panthers will be a statement game.  Seattle has the opportunity to bury Carolina as they come off 10 days rest.  A win at Bank of America Stadium would give Seattle a tie-breaker over a potential Wild Card contender.

Seattle will have to face the Vikings who are hoping to win the NFC North, but either them or the Bears will likely be vying for one of the Wild Card spots.  We've already conceded a tie-breaker to Chicago with our week 2 loss to them, so Seattle cannot give up any more ground to the NFC North.

My hope is that Kansas City will have long since clinched the AFC West before they come here.  It would be ideal to find the Chiefs resting key starters for the playoffs ahead of this match up.

Things look good for our Seahawks down the stretch. The young players are coming into their own and the team is gelling in November, as usual.  A loss last night would have been devastating as we would likely have had to watch and hope for other teams to lose for any hope of a Seahawk postseason.
Posted by Chris Collier at 8:36 AM