Man, I hate when the Seahawks play Carolina.

I know, I know-- Sunday's victory puts Russell Wilson's record against Cam Newton and the Panthers at 6-1, with that lone loss coming in the playoffs of Newton's MVP campaign.  Seattle has certainly proven themselves to be the Kryptonite to Cam's Superman.

But every damn time these two teams meet, it's a slugfest that always goes to the wire.

Ron Rivera's team is similarly built to Pete Carroll's and their match ups always make for great games. Still, they always leave me biting my nails until the clock finally hits zero.

This game was no exception.

The Panthers started hot, stuffing Seattle's red hot rushing attack before sacking Wilson to force a 3
and out.  They proceeded to march down field before Seattle finally slowed them up in the red zone. Rivera, undoubtedly in an attempt to seize early momentum for his team and home crowd, opted to go for it on 4th, but were stuffed by Bobby Wagner and the Seahawks defense.

I'm sure coach Rivera is catching a ton of shit this week for that play call.  Yeah, it might have cost them the game, but when you consider the fact that Seattle's greatest strength is running the ball, and running when you're behind late in the game is impractical, it's easy to understand how an early touchdown in that spot could've put Carolina in the position to really step on the Seahawks throats early and never look back.

Unfortunately for them and to the Seahawks benefit, that turnover on downs gave the team a confidence boost that kept the fight alive. 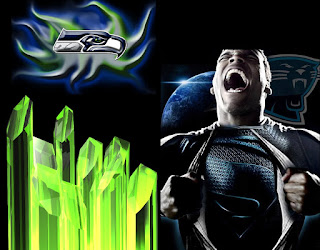 The Panthers effectively shut down Seattle's league leading rushing attack.  Despite what national analysts seem to think, this team never has been one dimensional despite Carroll's commitment to running the ball. The Seahawks have an elite, top 5 quarterback in Russell Wilson and he carried his offense to victory.

Before this game started, I kept telling myself-- It's okay if we drop this game so long as we win out.  I was trying to be optimistic about our playoff chances, knowing that this game could easily go against our favor.

This team has fight.  It looks good having only one remaining road game left on the calendar-- and that one is against the lowly 49ers.  Tough games ahead in prime time against the Vikings, who are struggling mightily, and the Chiefs, who may very well be resting their starters for the playoffs by the time that game rolls around.

The playoffs are in sight for our Seahawks who have already won 2 more games than the 'experts' projected them to have this season.  Below are two plays that, if you haven't seen, you absolutely must check them out.

The first is the remarkable flip that Chris Carson pulled off early in the game.  Had he managed to break free for a touchdown-- this would've replaced Beastquake as the single most impressive play I've ever witnessed.

Next, is this touchdown reception from Wilson to David Moore.  I have both complained about Moore's lack of aggressiveness on contested passes and marveled at his ability to sell the defender with his eyes while letting the pass fall into his hands effortlessly.

File this one under the latter-- but don't forget that this happened on 4th & 3 with the game on the line. 3 yards keeps the game alive, a turnover, on downs or by interception, almost certainly seals the game for Carolina.

Russell went for it all.


New angle of the most important play of the Seahawks season. 4th & 3 and Russell Wilson and @DmoeSwagg23 go for it all. pic.twitter.com/oqLcXXAkmY
— Parker Lewis (@ParkerLewisJR) November 26, 2018

While we await Richard Sherman's return to CenturyLink Field this weekend, make sure you vote for the Seahawks to make the Pro Bowl!