The Seahawks effectively demolished their formal rival on Sunday.  In a game that showcased Seattle's upward trajectory in all phases of the game, there was one particular element that stuck out to me. 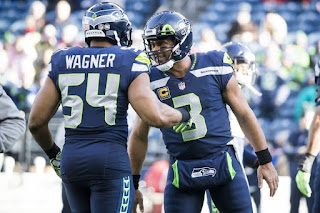 Russell Wilson threw 4 touchdowns in this game.  He did so while only attempting 18 total passes, completing 11 of them and amassing a meager 185 yards through the air.

Anyone that watched this game could tell you that the Seahawks were dominant.  At no point in this contest was there ever any doubt that Seattle would win and win handily.

San Francisco quarterback Nick Mullins, on the other hand, went 30/48 for 414 yards, a pair of touchdowns and a single interception.

Looking at those numbers alone, you'd be fair in assuming that the kid had himself a hell of a game.

This is precisely my issue with the infatuation with passing yardage statistics.

Passing yardage is one of the most deceiving stat lines in football. While it can sometimes be
indicative of a team's success in a given game or a quarterback's success in a particular season-- it can also be the byproduct of lousy defense, lack of a run game, or simply the way the game plan happened to shake out that week.

Games like this are an enormous factor in Russell Wilson's national perception.  It's painfully evident that many national analysts do little more than review the box scores of Seahawks games without watching a single frame of game film.

Seattle could have won this game without attempting a single pass. They certainly could've won without Wilson throwing four touchdowns.

Wilson made the plays that he needed to and he executed them flawlessly, save for one pass that was just a tad out of reach for Doug Baldwin. Unfortunately, there is no quantifiable metric that accounts for Wilson's preparation and execution.

Russell Wilson may never get the true recognition he deserves because of his incredibly diverse skill set and unrelenting determination to win, but Seahawks fans better recognize.

Similarly, on the other side of the ball, Bobby Wagner continues to amaze on tape while coming up short in the recognition department.  Like his quarterback, Wagner's intangibles and immeasurables are difficult to quantify on a stat sheet.

The Seahawks have put themselves in position to be a playoff team and largely from the efforts of those two, ego-less men. Seattle can solidify their post-season potential with a win against Minnesota on Monday Night Football next week.

Here's hoping they show a national audience what Seahawks fans have known for a long time.
Posted by Chris Collier at 2:15 PM