I'm sure I am not alone in saying that this game ruined my weekend.

In the grand scheme of things, this loss will not have much of an effect on Seattle's playoff hopes in general. Perhaps I'm making a mountain out of a mole hill, but this one hit me hard.

Seattle need only to win this game against the 49ers and they would've found themselves clinching the playoffs, a feat nobody expected given the turnover from the team that missed the playoffs last year.

They also would've taken the record for most consecutive wins over an opponent-- a record that fell just minutes before kickoff, when the Browns beat the Broncos for the first time since 1990.

Still, Seattle's playoff hopes are very much alive and who cares about meaningless records, right?

I'm an ardent believer in the psychology of the game of football. I think momentum means something.  I think that intimidation means something. The intangible part of the game that cannot be measured, but the effects are nevertheless still felt by many who play, watch and study the game.

While I'm in no way suggesting that the Seahawks 'didn't come to play', I firmly believe that San Francisco wanted this victory just a little bit more.

San Francisco is on the right track.  They've found a good coach, their defense has some talent that they will undoubtedly build upon and, evidently, they have two viable options for quarterback this team next year.

But this season-- they're no where near Seattle's level. The score of the previous match up this season is indicative of that alone. 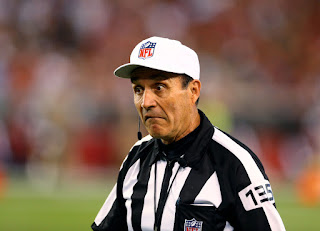 Seattle started this game on script.  A stout defensive stand resulting in a punt that would give the offense tremendous field position.  The offense responded in kind with an opening drive touchdown.  Everything was going as plan.

Then Janikowski missed an extra point.

Everything went downhill from there.

Levi's Stadium has been an embarrassment to the game of football since it's inception.  There are high school fields throughout the nation with field turf that puts their's to shame.

Why this hasn't been figured out in the four years since it's opening is beyond all logic.  Furthermore, why the Seahawks didn't account for this is even more maddening.

The broadcast noted several of the players making equipment adjustments mid-game.  They even showed footage of Janikowski landing on his backside while attempting a kick.  Why on earth did they wait until the game was underway to make these changes?

After botching the kick, the 49ers ran the ensuing kickoff back for a touchdown.  Janikowski's attempt to subdue the returner will no doubt find it's way to the follies archive at NFL Films.  Special teams had it's worst showing of the season on Sunday.

Seattle's offense played well.  Baldwin came back to form, catching two touchdowns from Wilson.  Carson ran for 100+ and scored a late touchdown. They continued their struggles of converting drives into points, but otherwise had an admirable road showing.

The defense was sloppy.  Missed tackles, guys being caught out of position, and generally making Nick Mullens look like Joe Montana.  The game was confusing, in the sense that there were many outstanding individual performances on the Seahawks defense, but there were far too many mistakes to negate those efforts.

The officiating was the worst I have seen in a while.

Seahawks were penalized 148 yards, most in franchise history. Some were deserved, but there were a handful, particularly in the games final moments, that were mindbogglingly unnecessary.

Referees should always throw their flags with caution in the final moments of a game.  Nobody feels good about winning on a technicality.  I know-- a win is a win-- but don't tell me you feel the same way about the "Fail Mary" game as you do with other close victories.

Peter Morelli, the head official from yesterday's game, looked like someone who would have rather been anywhere else on the planet than at that game.  He is only two months younger than Pete Carroll, but looks every bit of 67 compared to Pete.

Pete's the oldest coach in the league.  He's also one of the most energetic and passionate.  The same cannot possibly be said of Morelli.  I'm trying my damnedest to not have this come off as ageist in any way-- but, for the love of God, can we get some younger officials?

Two pass interference calls that had a marked impact on the games outcome, were simply non existent.  The one called on Delano Hill was absolutely a pushing off penalty against San Francisco, but somehow was levied against Seattle.

The officiating played a huge roll in this loss, but Seattle's sloppiness on defense and special teams meltdown were much to blame, as well.

Seattle can clinch this Sunday, but instead of playing an opponent that was vying for the first overall pick in next year's draft, they'll be facing one of the best teams in the AFC with an MVP candidate at quarterback instead of a free agent walk on.

If they can right the ship and win these final two home games, Seattle can still roll into the playoffs with a full head of steam.  It's unfortunate they didn't take the easy path, but maybe this is the wake up call they needed to remind them that they'll have to bring their best every week once the playoffs are underway.
Posted by Chris Collier at 10:19 AM