If none of us expected the Seahawks to get this far-- why does this loss hurt so much?

I've been a do-or-die Seahawks homer all my life, so I always assume we have a shot at the Lombardi, but this year felt different.  I correctly picked the Seahawks to go 10-6 back in August, but in my heart I still expected 11 or 12 wins.

I honestly thought the Seahawks would handle Dallas, though I didn't believe they had the roster depth to beat the Rams or the Saints on the road, with them having the previous week to rest up. 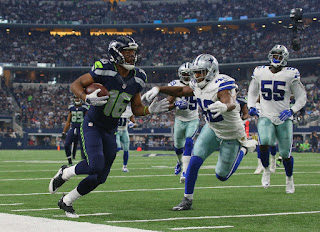 Seattle came up short yesterday for several reasons.  However, I'm not in agreement with the masses on Twitter as to what those reasons are.

The social media consensus is that Brian Schottenheimer needs to be fired and everything is his fault.  I think that's patently absurd.

Schotty had an outstanding first season.  He, along with offensive line coach Mike Solari, took our run game from worst to first.  They didn't spend a ton in free agency to accomplish this, relying mainly on the ingredients left behind by the previous regime.

Dallas made Chris Carson a non-factor.  Carson, who averaged 4.6 yards per carry this season, was held to 1.5 YPC in yesterday's game.  When you get less than 5 feet per carry, you're going to put your team in long 3rd down situations.

It wasn't the play calling that was bad.  The only thing I'll fault Shotty for in this game was how long it took them to give opportunities to Mike Davis, Rashaad Penny and JD McKissic-- all of whom fared much better.

I hope everyone is able to recognize what neglecting the Kicker position has cost this team since letting Steven Hauschka go two seasons ago.  We tried to save a buck by bringing in Blair Walsh last year-- everyone agrees that cost us at least two games and a playoff appearance.

This past offseason, they went back to their 'always compete' roots and brought in a pair of kickers to vie for the job.  A young kicker named Jason Meyers and a seasoned veteran in Sebastian Janikowski.  Seattle opted to go with the veteran, which seems like the responsible choice. 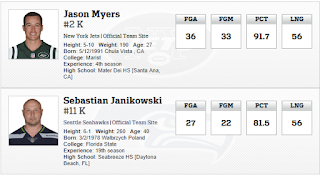 But Janikowski is 40 years old and looks like he pays less attention to his physical health than I do.

Janikowski's poor conditioning cost us a win against the 49ers where he missed a field goal and gave up a kickoff return for a touchdown. It cost us yesterday's game when he missed a 57 yard field goal that would have ultimately been the difference.  He left the game after that, leaving Seattle without a place kicker.

Depth hurt this team in the long run this year.  After losing Will Dissly early in the season, it seemed like the Seahawks didn't have a tight end for the rest of the year.  We really didn't have any reliable pass catchers beyond Lockett and Baldwin.  Which is why I'm astonished to see so many social media gripes as to why Wilson wasn't 'unleashed'.

I guess it's so painful because Seattle could have won this game.  We've seen it so many times over the past 7 years.  Wilson making the game winning play.  The defense making an improbable stop or turnover.  To see this game end so unremarkably with a pooch kick masquerading as an onside attempt was defeating.

There is so much to look forward to next season.  Seattle can make a few key free agent acquisitions and have a solid draft that could legitimately put them back in the running for NFC West supremacy.

We can't deny that this was a tremendously successful 'retooling' year.  We'll get 'em next year.

Posted by Chris Collier at 9:25 AM