First Place in Spite of Everything - Seahawks 26 Falcons 24

The Seahawks came out well-rested from their bye with a win over one of the hottest team's in the NFL. This game had all the makings of a blowout if you were able to erase the 3rd quarter from your memory.

In spite of the 3rd quarter meltdown, the Seahawks were solid.  This game was the ultimate testament to their incredible depth.  Kam Chancellor and Frank Clark, two crucial members of the defense, were inactive for this game.  Luke Willson and Michael Bennett, another two integral pieces, left the game with knee injuries.  Christine Michael was even held out for a portion of the game with concussion concerns, but ultimately returned to finish out the game.

Nevertheless, this team fought on to overcome a Falcons team that they might very well see again in the playoffs. 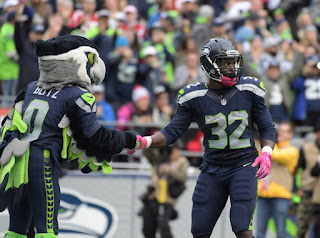 Before I go any further, I have to apologize and give credit where its due. I have (justifiably) been outspokenly critical of offensive coordinator, Darrell Bevell.   The past few seasons it has been as if he has no idea what the strengths and weaknesses of this roster are.

Because of his track record, I came into this season legitimately horrified at the prospect of how he was going to handle the absence of Marshawn Lynch.  Through these first 5 games, I couldn't be more please with what we've seen from Bevell's game planning and play calling.

The last season with Lynch was reminiscent of the last year the Seattle Mariners had Ichiro.  A superstar exiting the twilight of their career who had been, pardon the pun, a linchpin for your franchise for many seasons.  Both players were shadows of their former selves, unable to produce at the level we were all used to, but still deserving of the utmost respect.

We saw both organizations try to make it work, but Father Time is undefeated.  The lack of familiar production polarized the fan bases.  Eventually, both teams had to come to the inevitable conclusion that it was time to part ways and reinvent themselves.

For the Seahawks, this meant turning the keys to the franchise over to their quarterback.  Russell Wilson has earned it.

Sunday's victory over Atlanta was Wilson's 20th 4th quarter come-from-behind victory.  It was also his 50th career win-- making him the fastest player in league history to hit that milestone. Oh, and did I mention that he's playing on a sprained knee and ankle?

Wilson is elite.  Even better-- Bevell gets it.

Furthermore, we're finally getting to see what the Seahawks had in mind when they traded their Pro Bowl Center, Max Unger and a 1st Round pick to acquire Jimmy Graham from the Saints.  These two have been the centerpiece for this team through the first 5 games and it doesn't appear that anyone has an answer for them.

The offensive line is improving with every game, too.  Getting a healthy Germain Ifedi in at right guard has made the progress even more noticeable.  Still, something seems missing from the run game.

Christine Michael has been serviceable.  No one expected him to be the team's feature back this season.  Even after he started the opening game, it was understood that Thomas Rawls was the guy as soon as he was healthy.  Well, just as I had initially feared, Rawls is having a difficult time staying healthy.

Additionally, Michael isn't getting much help in the backfield.  Wilson's injury issues are preventing him from being the solid contributor to the run game.  Lacking the threat of a mobile quarterback that can take off and burn you, teams are able to focus more on shutting the run down.  CJ Prosise hasn't played but a handful of snaps all year as he battles a wrist injury and Alex Collins can best be described as 'just a guy' through the first quarter of the season.

After a surprising start last week, CJ Spiller came plummeting back to reality.  He was a non-factor in Sunday's game against Atlanta and he had at least a pair of crucial dropped passes.

One thing I was really excited to see regarding the run game was when the Seahawks were at the goal line trying to tie up the game late in the 4th quarter.

The offense lined up in a goal line formation with two tight ends and three tackles.  From left to right the Sehawks had Graham, Sowell, Glowinski, Britt, Ifedi, Webb, Gilliam and Willson.  That's a big spread, but that's not even the part I liked most!

Lined up at fullback was Joey Hunt-- the rookie Center Seattle selected in the 6th round of this year's draft.

When Seattle selected Hunt, there was concern for him being undersized for the Center position at 6' but everyone was raving about his work ethic and football IQ. Given that Seattle doesn't have a fullback on the roster, I thought this was a brilliant move and hope that we will see more of it in the future.

Defensively, this team continues to prove themselves as the best in the league. The Falcons came into the CLink with the most passing yards and the best running back tandem in the NFL.  The Seahawks tenacious defense held that tandem to a measly 50 yards on the ground.

Earl Thomas had his best game of the season, including a clutch interception that lead to the winning field goal.  Kelcie McCray filled in nicely for Kam Chancellor, though Kam's absence created some communication issues in the secondary.  Kevin Pierre-Louis played well in place of Mike Morgan, who is out for the remainder of the season.

Seattle was able to overcome a series of adverse situations to seal the win and stay on top of the NFC West.  The Rams might be coming back down to earth, but the Cardinals appear to be heating up and they will face the Seahawks for Sunday Night Football next week.  The Cards will have a short week coming off Monday night's win, but they will have home field advantage.

Ultimately, I'm not worried about the competition.  This team has what it takes to go all the way this year.  They have unprecedented depth all across their league-leading defense and they have an elite quarterback at the helm.  No other team in the league can say that.
Posted by Chris Collier at 9:56 AM