For the first time in franchise history, the Seahawks ended a regulation game with a tied score. If you're a fan of smash-mouth, defensive football-- or, perhaps, soccer --this was a treat for you!

Unfortunately, while the Seahawks defense might have put on the single greatest performance in the history of the game, the offense could not have been more of a polar opposite.

At 4-1-1, The Seahawks find themselves in a good spot.  They're leading their division, trending in the right direction and in position to fight for the #1 NFC seed. That being said, Seattle needs to face some facts and take some preventative measures to make sure they don't sabotage their championship window.

Russell Wilson is hurt.  All the positive talk in the world isn't going change that.  He can still play and his passing ability doesn't seem affected, but he's a mere shadow of his former scrambling, play-extending-self. The film doesn't lie. The stats don't lie.

This offensive line is just that-- offensive. Last night was film study for what happens when a team spends all of its money on a QB and Defense while leaving nothing else for the remainder of the offense. The face of this franchise has now been injured at least twice because of this neglect and to assume that this situation is going to get any better this season without making any roster moves is dangerously foolish.

We can't effectively run the ball.  With mobility all but completely erased from Wilson's repertoire and the sorry state of the offensive line group-- it shouldn't be any surprise to find Seattle ranked 28th in run offense. Heading into the 8th week of the NFL season, I can say with confidence that the Seahawks have whiffed big time on their Post-Marshawn plan. 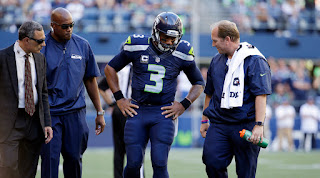 We fell in love with Thomas Rawls before our divorce with Lynch was even final.  Rawls was younger and had shown us 8 games of excitement and promise.

We had forgotten everything that Lynch had meant to this city, this team and Russell Wilson's development so quickly it was sickening.

And, what would you know...

7 games and a bye week into this season and we've seen just 25 yards on 19 carries from Rawls. Christine Michael has been this team's feature back and we didn't even want him on the roster.

At least the Seahawks tried to find some help for their backfield in the draft.  Unfortunately, they failed miserably.  3rd Round selection, CJ Prosise, has been a tremendous disappointment.  Injuries have kept him off the field for most of this season, but even when he's had opportunities, he hasn't produced.  We've been told since day one that Prosise was to have a special role with this team, so it doesn't seem as though he was ever considered to be an every-down back, but Alex Collins and Zac Brooks, who were taken in the fifth and seventh rounds respectively, were supposed to come in and push Rawls and Michael for reps.

Collectively, the three running backs Seattle took in the draft have provided 15 rushing yards so far this season.

You could argue that Wilson's injuries threw an unexpected wrench in the Seahawks run game plan this season, but that argument is a feeble one.  Yeah, his scrambling ability and uncanny prowess for sensing pressure and knowing exactly when to get down made you feel safe putting your cap money behind your defense.  He's young and in peak physical health-- he can handle it.  Hell, it has worked thus far, so why should the Seahawks brass NOT have assumed it wouldn't work again this year?

Your championship window is open and you just paid your QB big-time money.  Why risk fate?

On top of all that mess, this team may have lost their starting blindside tackle, Bradley Sowell, for at least a few weeks.  His apparent replacement appears to be undrafted rookie George Fant-- who has only played in 15 football games in his entire life. The converted basketball player is an intriguing project, but is this really the right person at this time to protect your injured franchise quarterback's blind side?!

What would happen if George Fant's inexperience leads to a devastating injury to Russell Wilson?

What if Russell sustains a season-ending injury this weekend because we neglected to address our offensive woes? Travone Boykin would come in, an undrafted rookie quarterback, with Christine Michael as his feature back and the worst offensive line in the NFL.  With that formula, I think we'd be lucky to see the Seahawks finish 5-10-1 this season.

The good thing about that scenario is that we'd likely be picking in the top 10 of the draft, where we'd be in a great place to draft our left tackle of the future.  However, we'd probably see a few of the championship-caliber players we've amassed find new homes, just as we have every offseason. The window would get a little bit tighter, though remaining open, but the idea of a dynasty would quickly fade away.

We've been in a very fortunate position these past few years under Coach Carroll. I've been largely blown away by what this leadership group has done in their brief tenure, but I can't help but catch a whiff of arrogance from the way the offense has been managed here that just rubs me the wrong way.  I would get no satisfaction from saying "I told you so" should anything happen to our quarterback, so my hope is that Seattle mortgages the future by trading a draft pick for a competent left tackle ahead of next Tuesday's trade deadline.

Posted by Chris Collier at 3:03 PM