It's a Halloween Monday and I'm terrified that Seattle is not going to make a move ahead of Tuesday's trade deadline.

This team might be 4-2-1 and in first place in the NFC West-- but behind that record is a frightening situation.

This team is hanging on by a thread.  I get that you can't play with fear of injury, be you a player, coach or fan-- but that doesn't mean you shouldn't prepare for worst while hoping for the best.

The Seahawks apparent strategy doesn't appear sustainable to me. Asking your defense to carry the team is a tall order.  Especially when your bye week came about as early as it possibly could have and you're coming off your 4th consecutive season with a post-season appearance.  You're asking for injuries or, at best, a defensive unit that is completely burned out by the time the playoffs roll around.

We should expect more from our defense purely based on the payroll-- and they've delivered to that point.  The offense has to meet them half way.  Or at least a quarter of the way.  They haven't even shown that. 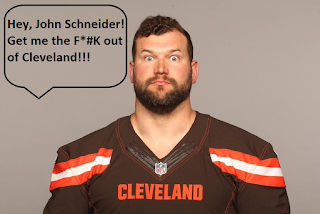 The Seahawks have a rough schedule ahead including match ups with the Patriots, Packers, Panthers
and each of the division opponents who seem to be hip to our play style. If Seattle doesn't make significant changes to their game plan-- I don't see this team finishing any better than  8-7-1.

With the rest of the NFC West floundering, that may still be good enough to win the division, but that would likely have Seattle hobbling into the playoffs with a beat up offense and a worn out defense.

Quite frankly, anything less than a Super Bowl appearance this season will be a tremendous disappointment.

Is it time to panic? Absolutely not. There's still ample time for the Seahawks to make adjustments and finish the season strong. But that has to start by making a trade to acquire offensive line help.

Maybe that's not Joe Thomas (though, I hope it is).  Maybe its not even Joe Staley. Bring in any veteran lineman that has played in the NFL. There has got to be someone better than Bradley Sowell and George Fant that is available.

We are so thin across the offensive front, God forbid something happen to one of the other linemen. We still have 9 regular season games to get through and a minimum of 3 playoff games to win the Super Bowl.

With Rawls status up in the air and Christine Michael being the model of inconsistency that he is, it might not be a bad idea to seek out help for the backfield, as well.  Even snagging someone off of another team's practice squad would go a long ways in showing that this staff is taking preventative measures to stay competitive.

Sure enough, not long after I praised Darrell Bevell did he fall into his old ways.  My good friend Adam refers to it as Bevell having to be "the smartest guy in the room".   The whole 'They're-expecting-Lynch-to-get-it-so-lets-pass' mentality was on full display for the final play of Sunday's game.

Right now, Seattle is treating Tom Cable the same way they're treating their entire defense.  They've basically provided him with a ton of manure and asked him to polish it into Super Bowl rings for the entire team.

Joe Thomas might be 31 with only a handful of seasons left in him, but if Seattle is serious about developing guys like Fant, Ifedi, Glowinski and Gilliam-- they would benefit greatly from an All-Pro veteran presence for a few years.

They have to at least be serious about having Wilson at QB beyond this season. If they don't trade for some help, his days could be numbered.
Posted by Chris Collier at 2:33 PM